7 Most Scary Ghost In Indonesia


Please Share this article is useful !
In Indonesia is no stranger to the name of a ghost. many kinds of ghosts are known in Indonesia. ghost ghost comes along with the myth or event that is experienced by those who he saw a sinister figure. But need I remind you that it's actually all kind of ghost or demon genie who intend to tempt us and destroy our faith.

Here are 7 Most Scary Ghost In Indonesia 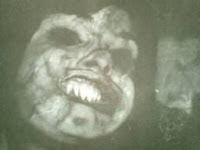 Wewe Gombel also called Grandma Gombel is a term in Javanese tradition, which means evil spirit or a ghost who likes to kidnap the children, but did not harm her. It is said that children are often kidnapped children abandoned and neglected by her parents. Wewe Gombel will usually scare the child's parents on the attitude and treatment to their children until they are realized. If they had been aware, Wewe Gombel will restore her.

According to the story, the myth is believed Gombel Wewe used to scare children so they do not wander around at night. Because in the past, the dark is very dangerous because wild animals may enter the village in darkness. Therefore, Wewe Gombel created to save them from the threat. Wewe Gombel usually depicted with a wrinkled old lady figure with breasts that look long and hanging. (Wikipedia) 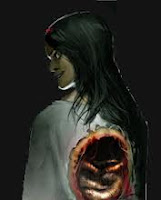 Sundel bolong (in the Malay language: bitch perforated) is a myth that ghosts of the archipelago is generally described as a beautiful woman with long hair and a long white dress that hole ("hole-through") on the back of a slightly closed her long hair so that the organs of the body parts stomach look.

In myth in Indonesia, ghosts are spirits of curious perforated sundel of women who die because of being raped and then gave birth to her son in the grave. Sundel perforated according to myth also likes to steal babies born recently. Sundel perforated according to myth was very shy with a hole in the body and is always trying to cover it up. Sundel perforated ghost is said often manifests as a beautiful woman walking alone on the road sunyi.Ada notion that myth is first created and deployed on the archipelago to avoid a woman walking alone at night in the countryside of the interference of men intent on evil, especially to rape. (Wikipedia) 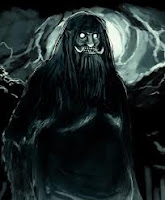 Genderuwa (in Javanese pronunciation: "Genderuwo") is a type of Javanese myth of the jinn or spirits in the form of an ape-like man who was big and stout with reddish black color, covered in thick hair growing all over his body. Genderuwa most widely known in the community on the island of Java, Indonesia. Sundanese people call it "gandaruwo" and the Javanese are generally called "devils".

The origin Genderuwo believed to come from the spirit of the deceased is not perfect, can be due to suicide, burial is not perfect nor the spirit of the accident that was curious and did not want to accept his death. Genderuwo can not be seen by ordinary people but at times he can reveal itself when disturbed. Genderuwo believed that not all evil, because some are good and their attitude depends on how people behave, whether to friends or hostile to such genderuwa.

Kuntilanak (Malay: Pontianak or Puntianak, or often abbreviated kunti) is a ghost who is believed to come from pregnant women who died or the woman who died in childbirth and the child had not been born. The name "puntianak" stands for "women die childless". This myth is similar to the mythical ghost langsuir known in Southeast Asia, particularly in Indonesia archipelago.

It is said that men who are not careful could be killed after kuntilanak transformed into blood-sucking. Kuntilanak said often manifests as a beautiful woman who walked alone through the silent streets. Therefore, this story aims to avoid the possibility of her class than disturbed by youths who fear Kuntilanak when walking alone on a deserted road. 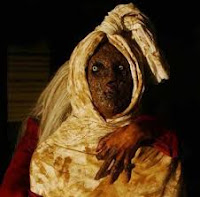 Pocong is a kind of tangible ghost bolsters. In Malaysia, the specter of this kind is also known as ghost packs. Pocong varied depictions. It is said, has a face berwarnah pocong green with empty eyes. The depiction of other states, faced pocong "average" and has a hole or hollow eyes closed cotton with pale white face. Those who believe in the existence of ghosts is thought, pocong is a form of "protest" of the dead are forgotten before the grave was opened bonding kafannya closed.

Although in the movies is often portrayed pocong jumping moves, myths about moving pocong alleges pocong hovering. This is understandable, because in the movies starring pocong could not move his legs so that the passage should be jumping up and down. This situation is also the cause of a statement that was used to distinguish between genuine and pocong pocong fake people. The belief in the existence of ghosts pocong only grown in Indonesia, especially in Java and Sumatra. Although the depiction follow Muslim tradition, people of other faiths also appeared to acknowledge the existence of ghosts. 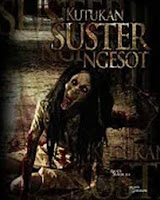 Sister ngesot memekai the ghost nun clothes, the way she ngesot. Historically no one can determine the origin of nuns ngesot, but there is some information by word of mouth in the community who then believed to be the history of the Sisters ngesot. Ghost Sister ngesot trusted by society because the story or history, the first story in Cipto Mangunkusumo General Hospital, Jakarta, because in that place there was a nun who died unnatural.

In the evening there was a nun who perform their duties keeping a patient, the state of the night was very quiet and silent no anyone that there is only one doctor on call, when the nurse was about going to the laboratory, it is hindered by the attending physician, then raped and sadistic and brutally murdered with his legs mutilated and buried it in the laboratory.

Another myth about the sisters ngesot of West Java, which is in a nursing home where there was a beautiful nun Sister Dutch descent named Norah and she has magic, because of his ability that he used to kill all existing residents in nursing by reason of personal revenge time ago. Then the crime is known by the public, as punishment Norah feet beaten until crushed and broken people. And there beberpa old hospital in Indonesia believed to have a similar story about the nun story ahir ngeot the same fate has become a ghost that way not by foot but ngesot.

Palasik according to stories, legends or beliefs of the Minangkabau is a kind of magical creature. According to Minangkabau belief palasik not a ghost but a black man who has a high level of knowledge. Palasik greatly feared by mothers who have toddlers in Minangkabau palasik because the food is baby / toddler, both of which are still in the womb or the dead (buried), depending on the type of palasik.

Science palasik believed hereditary nature. If the parents are a child palasik it would be so palasik. In general palasik works by releasing head. There are agencies that run its search for food, and others of his head hovering foraging.