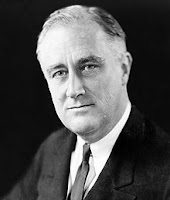 He was one of the leaders of the 20th century and ranks third in the history of the U.S. presidency. Born in an affluent, he also passed the point, disabling pain. He put himself at the forefront of supporting the reform. Family and close friends call him Frank. For the Americans, he was familiarly known as FDR. One of the achievements of the famous Roosevelt because of his leadership helped the United States recover from the "Great Depression".

In planning for World War II, he was preparing the U.S. to be the "Arsenal of Democracy" against the forces of Nazi Germany and Imperial Japan, but the leadership aspects, especially its attitude towards Joseph Stalin considered naive, has been criticized by some historians. Finally, his vision of an effective international organization to maintain peace achieved by the formation of the United Nations.

Early career
After the first hundred days in office, Roosevelt had shown themselves as capable leaders. He gained popular support that is unique in American history in launching a pilot program aimed at the so-called As with systems that are more social and more democratic. The program is known as the "New Deal."

In 1936 in the Presidential election year, the peaceful revolution in the economic and social launched by President Roosevelt has managed to bring back some of the improvements and the construction of America. Therefore he was re-elected as president with a huge turnout.

During his second term, from 1937 to 1940 President Roosevelt faced many hardships. He disagreed with the U.S. Supreme Court, the U.S. economy suffered a setback and in September 1939, war broke out in Europe with the German invasion of Poland. Through this legislation, President Roosevelt sought to prevent Americans from the war, but in addition to that it also strengthens nations threatened or attacked.