Please Share this article is useful !
God Bless is a rock band that has become a legend in Indonesia. Of the 1970s can be regarded as their glory years. One proof of their big names is when God Bless selected as the opening concert of legendary rock band the world, Deep Purple in Jakarta (1975). 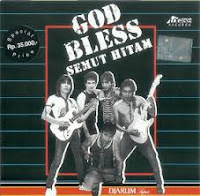 God Bless The establishment began with the return of Ahmad "Iyek" Albar returned to the country after several years living in the Netherlands, he dreamed of forming his own band more serious. He came back from Holland along with Ludwig Lemans (guitarist Clover Leaf, Iyek band when he was in the Netherlands). Iyek then took (deceased) Fuad Hassan (drums) and Donny Fattah (bass) to form the band. This is what lies behind the establishment of Crazy Wheels, before the band - which held its inaugural concert in TIM (Taman Ismail Marzuki) and then follow the stage musical "Summer '28", a kind of stage 'Woodstock' style Ragunan Indonesia in Jakarta, followed by various bands of Indonesia, Malysia and the Philippines - changed his name to God Bless on May 5, 1973.

Jockie Surjoprajogo (keyboards) had just joined the Crazy Wheels / God Bless the beginning of 1973. He intended as a substitute Deddy Dores - who had joined God Bless but did not last long in the band because they have to take care of his own band, Rhapsodia. However Jockie can not last long. His position was replaced by (the late) Soman Lubis. 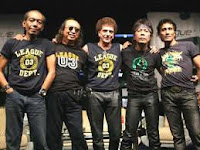 In June 1974, Fuad Hasan and Soman Lubis (keyboard) traffic accident in Tugu Pancoran, South Jakarta. God Bless even through a period of mourning. Plus, the guitarist Ludwig Lemans also decided to get out of God Bless. Thus, the remaining personnel live and Donny Fattah Ahmad Albar. To fill the void on the keyboard, they invite Jockie to rejoin. Jockie then invites Ian Antono (guitar) and Teddy Sujaya (drums) to join God Bless. To commemorate Fuad Hassan and Soman Lubis, God Bless appeared on TIM with the theme of remembering a hundred days Fuad Hasan and Soman Lubis has to carry the coffin to the stage.

In the beginning, God Bless is not a band that has a song. They are just an ordinary band brought the songs of others, such as Kansas, Easy Beast, Genesis, Deep Purple, at each appearance. The process of entry of this legendary band into the studio started with trial and error. They wrote the song, and then record it. They recorded it in a studio run by Alex Kumara (expert broadcast). These recordings can be reached PT Aquarius Musikindo because Suryoko - Aquarius boss - often learn guitar at home Ian. They both had been friends for a long time. And in 1975, releasing her first album God Bless.

Towards the making of the second album, Jockie Surjoprajogo out of formation, position later taken over by Eternal Soesman who joined in 1979 and was involved in the making of the album Mirror (1980). Unlike the previous albums were recorded material while completing the song, album Mirror (1980) conceptualized and prepared properly a few months before entering the recording. On this album, the concept of music God Bless slightly changed to bring potions arrangements of his songs seem more complex, requiring skills in addition to their high personnel also compactness in play, such as songs Musicians, Son of Adam, Good Morning Indonesia or Sodom Gomorrah. Even when recording, Teddy Sunjaya not use the metronome like most other recordings. Mirror album also represents rebellion against God Bless the recording industry dominance when it is always imposing the commercialism of the demands of the market when it was dominated by pop music with the theme of love in the eyes narrowly. This album is often cited as the most idealistic album God Bless and best of the musikalitasnya. And a barometer of the quality of a rock band at that time, when able to play songs from the album Mirror. Two years after the album was released Mirror, Eternal Soesman resigned.

In about the 1980's, one of the promoters of rock from Surabaya, Log Zhelebour began aggressively rock festival staged in Indonesia, and begin to awaken God Bless from the "long sleep" by making the songs as a song God Bless "must" also personnel from jury duty at the festival were finally delivered many rock bands in Indonesia, such as Grass Rock, Elpamas, until Slank.

From just being a juror, in 1988 finally delivered the album God Bless the Black Ants come back that exploded in that time, with hits such as Our Home, Black Ants, or Life. In sales, Black Ants album was the best selling album God Bless. On this album, there was another change in the concept of music God Bless. Of the progressive rock was more nuanced drastically changed to be a little harder with the influence of hard rock and heavy metal, as well as to consider the commercial market tastes. Even so, the music quality is still maintained strong. The album was also the inspiration for young people to continue working in the field of rock music. However, after the album came out the Black Ants, Ian Antono declared out of formation God Bless. His position was later replaced by a talented young guitarist, Eet Sjahranie. Upon entry Sjahranie Eet, in 1989 dirilislah titled album with hits Licking Giant sun, in March 1989, or the Mysteries. Eet Sjahranie successfully refresh guitars Ian Antono God Bless and make more aggressive. Ian Antono himself, after leaving God Bless pioneered countless successful solo career as a songwriter, and producer aranjer.

After passing through the vacuum long enough, in 1997, God Bless the personnel, including Ian Antono Eet Sjahranie and re-assembled. 'Workshop' that their titles in the Peak area, resulting in an album titled What news. But the reunion did not last long because Eet officially resigned from formations God Bless and concentrate on his own band, Edane which since 1992 has released her first album, The Beast.

Although not much released an album, God Bless, considered a legendary rock band Indonesia because it is considered as a pioneer who has high musical quality. Throughout the journey, the group had 15 times more personnel changes are referred to as 'formation', and is currently living Ahmad Albar (vocals), Ian Antono (guitar), and Donny Fattah Gagola (bass) can still be regarded as active personnel group.

In February 2009, they performed on the show Kick Andy on Metro TV with 5 personnel, namely Ahmad Albar (vocals), Ian Antono (guitar), Donny Fattah (bass), Yaya Moektio (drums) and Eternal Soesman (keyboards). They said it would issue a new album in the near future. And right at the beginning of May 2009, God Bless finally issued a new album titled 36th.