Biography of James Naismith-Inventor of Basketball 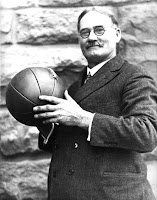 Sports Basketball, is one of the most popular sports in the world and the world's most widely contested, inventor Games or Sports Basketball is James A. Naismith was born on November 6, 1861 in Almonte, Canada. Before moving to the United States Naismith studied physical education (Physical Education) in Montreal, where Naismith developed basketball in late 1891 during enrolled in YMCA International Training School in Springfield, Massachusetts. While working as a teacher of Physical Education (physical education) at the YMCA International Training School in Springfield, Massachusetts in 1891, he was asked to find ways to relieve the boredom experienced by students in PE class during the winter. The idea of ??a push to create a new game that is due to the fact at the time that the membership and visitors to the bevy of sports events YMCA (Young Men's Christian Associaton) bertambavh increasingly degenerate.

This is because its members became a bit bored with gymnastics exercises rigid. Also perceived need in winters to keep doing exciting sports activities, an insistence that is increasingly perceived Dr. Luther Gulick, head of the sports supervisor at the School Sport Teacher of the Springfield YMCA. Masachusets gejalan aware of the symptoms of sports activities that are less good, and immediately contacted Dr. James A Naismith a fellow teacher at Springfiled and assign him to construct a new sports game that can be played behind closed doors at a time when afternoon. Dr. James A. Naismith welcomes duty there, to begin developing a new game ideas that shape will be able to meet the requirements dimintakannya. In following a delusional mind to create a matching game, with the conditions given, the game is suitable to play in a confined space has limited the afternoon at a time when his mind on things that are not imaginary, but stepping on a concrete concentration with no elements of kicking and blocking, pulling, and is not so hard to learn.

Then Dr. James A. Naismith try and test the spin-spin-off of the softball games, baseball, lacrosse, and football but one does not match the requirements and demands, as well as hard to learn is still too Kassar for a game in a closed room with a lighted. From the experiments carried penalaman that inspiration arises about the shape and style of the game that it was desirable. It was clear that the game should be played with a round ball, kicking with no element, no element carried off with the ball, without the element of tackle and should eliminate the net as an additional target, because the latter will stimulate the use of force elements .

To tame the movement of the ball, then instead of running with the ball as seen in football, it is only done with the movement of the ball or passing mendribble. To tame shot toward the target as the pinnacle of excitement, then dig anti gawangpun with a narrow target located over the players. So that the shape of the target object such preferential shots with power, but by its accuracy. And because the target goal / goal lies above, then the ball must go through a satellite dish or a ballistic arc.

Furthermore Dr. James A. Naismith explains his ideas in the form of games that includes 13 chapters. Of the 13 chapters, 12 chapters including the core rules of modern basketball to date. One day Dr. James A. Naismith holding a soccer ball brings a player in the sports room with the intention of trying the game that he had thought it was. After the indoor sports, he thought that was appropriate for the goal crates only. And he asked for the help of the head of household school. Stebbin name implies, is when the offer needs it. But Stebbin not have a wooden box and instead offered a "Basket" (basket) peaches Naismith empty. Was agreed by the Naismith and basketball that are then hung by Stebbin on both sides of office on the balcony. Naismith explains its regulations, and the students / players to try and keep up.

From the origin of the fruit basket "peach basket", a name derived Basket ball, which is now famous all over the world. At first each ball into the basket, Stebbin have to go to the balcony to remove the ball, because the bottom of the basket was closed. Finally thought to make holes on the bottom of the basket. So little original story may be quoted from Harold Keith, "Sports and Games".

In August 1936, while attending the 1936 Berlin Olympics, he was named as the Honorary President of the International Basketball Federation. Born as a citizen of Canada, he became a citizen of the United States on May 4, 1925. Naismith died 28 November 1939, less than six months after getting married for the second time.