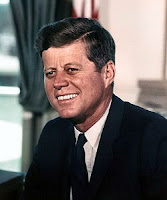 Kennedy became president after taking office on January 20, 1961. Position the Presidential stalled after the assassination in 1963. He was killed by a bullet brunt during a visit to Dallas (Texas) on 22 November 1963. Kennedy fell open when the car passed him in the crowd who welcomed his visit. On 25 November 1963, his body was buried in Arlington, Washington, DC. A total of 800,000 people on the streets of Washington mourn.

Kennedy is a member of the Kennedy clan blooded Irish-American, a prominent family in the country's politics. He is regarded as a symbol of American liberalism. In World War II, he was admired for his courage and heroism when he saved a fellow sailor in the South Pacific Ocean. Kennedy represented Massachusetts in 1947-1960, as a member of the House of Representatives and the U.S. Senate. He was elected President in 1960 with a slim victory in one of the most stringent election in American history.

In a survey conducted by C-SPAN that orders the U.S. president, a panel of historians give him value in the second position in the overall population and the general gave him the third ranking of the forty-two presidents who had served. The agenda was not completed due to his death; most people rights policies indicate the results through his successor, Lyndon B. Johnson.