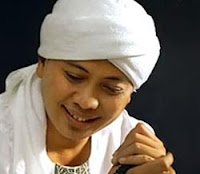 Who does not know Opick, a singer Islamic religious songs and also a composer whose much-loved in Indonesia, the fight of his life to be a very good singer to be listened to. Opick born with full name Aunur Rofiq Lil Firdaus. He was born of the couple Dra. H. Lilik Sholelah and Abdul Gofur, in Jember, East Java, March 16, 1974. Although little is known Opick brat, but in terms of studying religion, it includes children who are diligent. From the second orangtuanyalah more religious education acquired. Grandson K.H. Abdul Mukti, a fairly well-known scholars in the area, it has an independent spirit, confidence, and thinking ahead. As a kid who came from a modest family, Opick including children who are accustomed to swallow hard as it is generally the life of life in the township.

Opick first understand the meaning of self-reliance, goes back in elementary school when she had to stay in a boarding house to be close to the school. This is where the soul is actually embedded leadership because of their actions and attitudes should be taken alone without relying on their parents being away from his boarding house. This attitude continued until in adolescence. Feeling inferior to the state she lived often covered with a bold behaviors and attitudes indicate that captivate his peers. Opick dare to take a stand against the current to maintain the principles and ideals he held. Even so, it can be accepted by his peers, even in several occasions, always be a leader by his friends.

Since junior high, Opick already have the talent to sing and was able to play several musical instruments, and even set up a band. Opick musical journey long lived. However, determination and hard work continues to be embedded to achieve success. When entering adulthood, Opick upholding the principle of life. Unlike when he was small, at this time Opick over think how to achieve its goals, especially in a career in the world of art (music and theater). After high school, he decided to be domiciled in Jakarta in realizing its goals.

With a track record of capital with very limited tools, it offers the songs. However, all to no avail. No labels are accepted. In 1993, the first Opick domiciled in Jakarta, precisely in Gang Sawo, Rawamangun. Besides active in religious activities and friendly residents and blend in with the surrounding environment, participate Opick Sawo Community activities or community theater known as Bela Studio. At that time, very Opick aspire to join and be active in Theatre Workshop led by Rendra. Life Opick in Jakarta in the days it was far from stability. Capital Jakarta is a bit of talent in the arts especially in terms of music and religion to taste. However, he was known in his neighborhood as a students. That's what makes lost interest in him. He laments how he is not steeped in religion since the first. With that faith, he was compelled to learn more about religion in Jakarta. Large in the childhood students become stronger capital for him to interact with the science of religion.

Living alone in Jakarta, Opick gain more experience, especially about the nature of life. Before success, Opick has made good faith what will reap goodness. He continues to be confirmed this belief in every prayer. Until he was finally convinced that music is a way of life. An interesting experience is owned Opick habit singing in the street, at the bus stop before Arion, Rawamangun, Jakarta after every dawn till 7 am. This strange habit lived for 3 years. The reason, for vocal training, looking for inspiration from the past lalangnya vehicle and singers, as well as to convince myself to keep his ideals, that success in the music world.

in the 90's, began his musical Opick by forming a band called East wing rock band, the personnel is not no other friend in Jember. Unfortunately, the release of the album singing Journey protests from many quarters because of the lyrics offend many people. Criticism and input came from different parties. Because do not want to finish his musical career, Opick have to think long to change the flow and performance in music. With a variety of considerations, the rocker finally started to move. Turbans and koko be an option in every activity performance. Opick arguably one of the few singers and composers song istiqamah on the work of the Islamic religion after earlier fighting in the path of fortune mainstream rock music, but reap failure. Apparently, luck and blessing it gets in the path of religion.

Go pieces of rock music are contradictory to the religious melodies do not have to wait long and winding. Debut album the first religion, Istighfar, composed in the 2005's reap maximum results. Opick debut album achieved double platinum and sold over one million copies through the numbers. Opick successful career in music did not stop there. The following year, 2006, the launch of his second album, The Universe Mix, was no less successful. Even this success with the launch of his book Opick, Spiritual oasis in Senandung. When talking about poetry, the content of the songs are a reflection of the experience of his life since childhood. Life experiences into inspiration in every breath he created poetry recitation. Not surprisingly, his first book was published in 2005, is a surgically-poetic verse in such a way and has been linked with every story of his life.

Continues next album, Ya Rahman (2007), Light Heart (2008), Under Your Sky (2009), and by the end of July 2010 with producer Nadahijrah-Forte Records, released the album titled Shollu Opick Ala Muhammad. Consistent presence every year with a new album work, to make the father of three children as an icon of Islamic religious singer considered in the country music world. Not only solo, Opick also successfully brought a variety of duet hits with a number of other colleagues, such as Joey Ayala for songs contained in the album Fate of the Universe Mix, Wafiq Azizah, an international Qariah champion in the song Ya Rasul, and Rachel Amanda, child sitcom now teenagers. In terms of music, Opick not without creative team although not specifically have. But at least Opick has made a breakthrough in his career, which held a contest to sing religious songs, held for all contestants from all regions in Indonesia. As a result, in 2010, a few months ago, the 18 finalists will be chosen, and netted the winner three. According to him, they could be featuring in the songs to create a new face in the arena of religious music of Indonesia.

His success was not only in the field of music. Opick success also starred in several television advertisements. "Thank God, I am often asked to star in several advertisements on television and radio. We should be grateful, yes, a blessing from singing religious songs that can be accepted by all circles and maybe my name has been known to also be commercials, "he said. To achieve success, we need not think Opick heroics. "Do, go, and flow," he said. As long as we believe in what we are doing is good for a lot of people, consistent, and a lot of praying through it, certainly not difficult to get results from what diikhtiarkan. One thing he said, patience is the key that should not be overlooked.

One time in singing, two or three get a chance to play in the film world. Yap. That's the "tombo ati". Opick been present in the arena of big screen cinema. But is there any other motivation for Opick play movies? The answer is, yes really. That said, there is a restlessness in him. The enthusiasm in his mind is a huge boost in bid agrees to play the movie. The singer is already long enough to put the obsession to make the film work. Not only play as a player, in his film entitled Under the Sky, Opick also contribute to fund the process of making the big screen. It is arguably an act of courage because not all singers who want to take the risk in this area. In this first film. Opick directly involved in working out almost the entire process from the producer, director, arranger, screenwriter, up to players at once. Hence, idealism Opick very firmly in this movie. One of them, he wanted to show a different movie, a movie that could be an alternative spectacle for the people and not just films that almost similar. The film worked Opick contains stories about people marginalized coast. In essence, the story of the people who lost, but remains obedient worship.