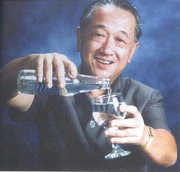 Indonesia people would know the brand Aqua, brand is very well known people in the whole area from urban to rural areas. Aqua pioneered bottled water in Indonesia, which is the idea of ​​Tirto Utomo is none other than the Founder Aqua. Tirto Utomo or Sien Biauw Kwa was born in Wonosobo, Central Java, March 8, 1930.

Because there are no junior in Wonosobo then Tirto Utomo must attend Magelang which is about 60 kilometers, the journey taken by bicycle. His life is quite pretty as her parents businessman cow's milk livestock traders. SMP Tirto Utomo went to HBS school (junior high school at the time of the Dutch East Indies) in Hyderabad and later in Malang. Tirto Utomo adolescence spent in Malang and that's where he met Lisa / Kienke (Kwee Gwat Kien). As usual Catholic school at the time the school for boys and girls separated. They both had just met at the school.

During two years of college at the University of Gajah Mada University in Surabaya, he spare time to be a journalist with a special task Jawa Pos news covering the court. However, because the study is uncertain, Tirto eventually moved to the Faculty of Law, University of Indonesia. In Jakarta and going to school he worked as Chief Editor of the daily Sin Po and the Five Colors magazine. In 1954 after the high school in Malang, Lisa entered the Faculty of Letters, University of Indonesia. While in college, Lisa worked at British American Tobacco (BAT Indonesia). March 19 555 Lisa failed the exam rate increases and then decided to drop out. When Lisa teaches English at Stone Ceper, a primary school teacher Regina Pacis, and receive translation and typing services, Lisa Tirto proposed and they were married on December 21, 1957 in Malang.

Disaster came in 1959. Tirto dismissed as editor in chief of Sin Po. As a result, the financial resources of the family are clear. However, due to events that have the willingness Tirto Utomo round to finish his studies at the Faculty of Law of the UI. While Lisa's role as breadwinner is to teach and open a catering business, Tirto study and also helped his wife. In October 1960 Tirto Utomo right to hold a law degree. After graduation, Tirto Utomo apply to Permina (National Oil Company), which is the forerunner of Pertamina. Once received, it is placed at the base Brandan. There, the need still use river water bath. Thanks to his diligence, Tirto Utomo uphill end of his career that was entrusted as the spearhead of marketing oil.

Position Tirto Utomo as Deputy Head Legal and Foreign Marketing made the most of his life abroad. At the age of 48 years, Tirto Utomo chose early retirement to deal with some private companies that AQUA, PT. White steel, and the Oasis restaurant. Aqua was founded with brother-in-law capital with Slamet Utomo Rp 150 million. They set up a factory in Calcutta in 1973 under the name PT. Golden Mississippi and brand Aqua production. Employees initially numbered 38 people. They dig wells in the first factory built on a land area of ​​7110 square meters in Bekasi. After working hard for over a year, the first products Aqua was launched on October 1, 1974.

How Aqua name is formed? Singapore designers who designed the logo suggested the name Aqua. Eulindra said Lim, the designer, Aqua easy to say and easy to remember besides meaning 'water'. Aqua is actually not a name familiar to him. He himself often using the pseudonym 'A Kwa' which sounds similar to 'Aqua' is still the chief editor during daily Sin Po and the Five Colors magazine in late 1950. A Kwa name itself is taken from the original name of the Kwa Sien Biauw Tirto Utomo while the name began to wear mid-1960s were not deliberate, which means 'water main'.

"It used to not playing hard. Given course people do not want. 'What for raw water', that censure that often we receive, "said Willy Sidharta. At that drinks like Cola rignan berkabonasi Cola, Sprite, 7 Up, and Green Spot on the rise so the idea of ​​selling water without color and taste, can be considered a crazy idea.

Until 1978 Aqua faltering sales. Not surprisingly Tirto Utomo admits almost shut the company because about five years of existence but the breakeven point can also be achieved yet. He did not stand having menombok continuously. But there is always a provision for people who are resilient and steadfast. Tirto Utomo with management eventually issued a silver bullet to raise prices almost tripled. At that time, this idea can also be spelled exactly crazy idea. Period, when in financial difficulty, instead of lowering the price that customers are interested but instead raise the price. Tirto itself has prepared anticipation supposing that effort will lead to decreased turnover. However, talk to other markets. Turnover rather than decreased even fueled up. Presumably people considered at high prices with high quality. Aqua also started serving segments interested in subscribing.

In 1982, Aqua replace raw materials (water) which was originally derived from wells drilled into the mountain springs that flow (self-flowing spring) because they contain the natural mineral composition rich in nutrients such as calcium, magnesium, potassium, iron, and sodium. One of the customers that Jagorawi highway construction contractor, Hyundai. From the South Korean engineers, drinking mineral water was transmitted to their native peers. That kind of transmission through drinking water kemaasan finally accepted in society. Tirto look everyday is very simple, friendly, smiling, but smart thinking. In conjunction with a subordinate, he embraced family management style and ability to trust their employees through a number of development and management training. At that time the cost of packaging can reach 65% of the production cost. Seeing that, Tirto Utomo Willy then the idea to combine plants with bottled mineral water business called PT. Tirta Graha Parama.

Currently, families Tirto Utomo no longer the majority shareholder since 1996 as the French food company Danone controlled a majority stake, while the family share 'live' 26 percent. However, Willy Sidharta, who is the biological child of their own Tirto Utomo, holding the post of director of the company. Option to join the multinational companies making strides Aqua recognized more agile. Mineral water industry competition requires aggressive efforts. Since then, major changes in the management of Aqua. In production, Aqua also jumped sharply, from 1 billion liters now reached 3.5 billion liters. Aqua controls 40% market share in the domestic mineral water.

"Many people think that producing bottled water is easy. They think it has to do is put tap water into a bottle. In fact, the challenge is to make the best water, packaged in bottles of good and deliver it to consumers. "Said Tirto Utomo.

Tirto Utomo already died in 1994 but the achievements of Aqua as a manufacturer of drinking water to the world's largest single brand will be retained until now.