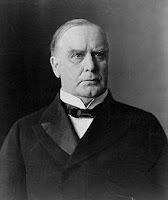 William McKinley was born on January 29, 1843 in Niles, Ohio and is the seventh child of nine siblings. At the age of 17 he entered college, but was forced to leave college shortly afterwards due to poor health. He eventually worked as a teacher. When the American Civil War broke out in 1861, 18-year-old McKinley entered the army and fought in West Virginia and eventually he was appointed Second Lieutenant.

After the Civil War ended, William McKinley studied law in an office for a year, and continued his studies for several years at the School of Law. In the age of 24 she began to open up the practice of law. At the age of 34 years McKinley obtain positions in Congress. His personality is charming, polite character, and intelligence caused him to rise rapidly. He served in Congress for 14 years and then he became governor of the state of Ohio for two terms.

Presidency
William McKinley became the Republican candidate for President in the 1896 election, thanks to the support of his friends rich, he won more than seven million votes of the total votes of almost 14 million. The administration of President McKinley busy with activities in the field of foreign policy.

Under his reign, the first American to acquire areas overseas, namely the Philippines, Guam, and Puerto Rico. This is the result of the Hundred Days War in 1898 between the United States and Spain. This war arises because America wants to help Cuba gain independence from Spain. In the hundred days war, the Americans destroyed the Spanish fleet outside Santiago harbor in Cuba.