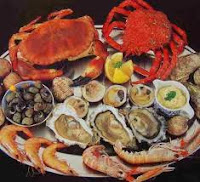 The cause is related to the factor of the body seseong but it is not certain. Thought to be caused by genetic factors and hormonal imbalance in the body that causes a metabolic disorder that can lead to increased production of uric acid. It could also be caused by uric acid spending tengganggunaya process of the body because the kidneys more problematic.

The cause is very closely linked to the intake of food that enters the body. Consumption of foods that contain lots of purines as major factors for secondary causes this. Uric acid production increases due to the nutrients we consume high levels of purines. Purine is a compound organic bases that make up nucleic acids (acid nucleus of the cell). He was among the amino acids, the building-blocks of proteins.

Increased production of uric acid can also be due to diseases of the blood (bone marrow disease, polycythemia), drugs (alcohol, cancer drugs, vitamin B12). Other causes are obesity (overweight), skin diseases (psoriasis), high levels of triglycerides. In patients with uncontrolled diabetes are common to both levels of ketone bodies (waste product of fat metabolism) are rising. Ketone bodies were elevated as a cause of gout is also rising.

IF according to the results of laboratory tests uric acid levels are too high, we need to pay attention to the problem of food. Food and drinks are always consumed is a precursor of uric acid. In obese people, uric acid is usually up while spending less. So for safety, people are usually advised to lose weight.

The most important thing to know is that high uric acid in the blood, without us knowing it will damage the body's organs, especially the kidneys, because the filter will clog. Blockage of the kidney filter will result in the emergence of kidney stones, or could eventually lead to kidney failure.

Uric acid is also a risk factor for coronary heart disease. Allegedly uric acid crystals would damage the endothelium (the inner lining of blood vessels) disease. Therefore, anyone that high uric acid levels should seek to bring it down so that the damage does not spread to the organs of the body.