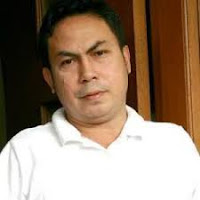 Finally Tata dado a comedian from Indonesia have died, suffered pain in Tata dado has finally ended his life. precisely on the 19th of March 2013 has been announced by obsession in one private television Tata dado is GlobalTV that have left this world and also has left friends who love him.

Tata Dado is not only well known to the family, but he was also known as a friendly figure among his friends, therefore normal that the departure Tata dado to provide scar will forever miss the famous comedian in the 1990's.

Before he died, Tata dado pulled last breath hold was smiling. There's no hint anything. Death really smooth, "he said at the funeral home on Masnaga Complex, Street of Papandayan, Bekasi, West Java, on Monday (18/3).

Forwarded, Tata is a person who is very friendly and nice. Not surprisingly, he has a large collection of costumes he gave freely to his friends. And then Tata costs for treatment.

"If you make ngejual costumes and clothes Tata dado, we are not no words auction but may be due to Tata sick, so there are rented. However, because many of his friends are like clothes Tata, Tata finally granted the same, "said Rudi again.

Tata over a friendly attitude, the family urged her friends to do a charity event. "His friends urged Tata family to make charity. From his friend collected approximately USD 20 million, "he said.

farewell for you tata Dado, may you be accepted by God the almighty one and hopefully Forgive your sins in the one almighty God, Amen.