✖
Home Information Mystery Eyed But Did Not See

Eyed But Did Not See 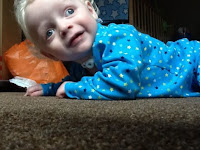 Sheffield, England, his face always looked cheerful as often plastered smile from her lips. But who would have thought that this cute boy apparently never sleeps, unable to speak, see and walk.

Rio Vicary (1 year) suffered Angleman's Syndrome (AS), a rare genetic disease that made him never sleep, could not walk and talk. But with all the circumstances, Rio still managed to smile every day for her parents.

This brave boy diagnosed when he was 2 weeks and had spent most of his life in the hospital, where he was monitored by a dozen consultants. Besides Angleman's Syndrome, Rio also had an albino who could not see him. Even so, he was very fond of light and enjoy the music.

Rio getting special treatment at Sheffield Children's Hospital, UK, where he has spent most of her short life since the diagnosis of rare diseases.

Rio is now equipped with a tracheotomy, which is a tube inserted into his neck. This is done because Gemma had experienced a terrible incident, as he had to take quick action to save the life of his son's choking. The tube is also the thing that can save the lives of Rio because he was coughing all the time. Rio may make a noise but he could never speak, because that's one of the symptoms of Angleman's Syndrome which also affects intellectual development and cause massive sleep disorders.

Children with Angleman's Syndrome commonly known as angels, because his face is always cheerful despite its shortcomings. This condition occurs due to chromosome disorder that is inherited from the mother and affects one in 25,000 children in the world.

Children born with this syndrome typically appear at birth without any major flaws, but developmental delays become apparent after six months. The ability to sit just happened at the age of 12 months, new walking at age 3 to 4 years. Sufferers also have a speech impairment.