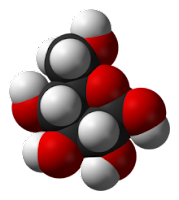 Glucose, a monosaccharide sugar, is one of the most important carbohydrate used as a source of energy for animals and plants. Glucose is one of the main results of photosynthesis and respiration early for. The natural form (D-glucose) is also called dextrose, especially in the food industry.

Glucose (C6H12O6, molecular weight 180.18) is a monosaccharide hexose-containing six carbon atoms. Glucose is an aldehyde (CHO-containing group). Five carbon and one oxygen to form a ring called "Ring piranosa", the most stable form for a aldose berkabon six. In this ring, each carbon bonded to the hydroxyl side groups and hydrogen atoms except the fifth, the sixth carbon atom attached to the outside of the ring, forming a CH2OH group. This ring structure is in equilibrium with a more reactive form, the proportion of 0.0026% at pH 7.

Glucose is a source of energy that are ubiquitous in biology. We can guess the reasons why glucose, and not another monosaccharide such as fructose, is so widely used. Glucose can be formed from formaldehyde in abiotic conditions, so it will be easily available to primitive biochemical systems. It is more important to the organism level up is the tendency of glucose, as compared to other hexose sugars, which are not easily react nonspecifically with the amino group of a protein. This reaction (glycosylation) to reduce or even destroy the function of many enzymes. The low rate of glycosylation is because glucose is mostly located in the less reactive cyclic isomer. However, acute complications such as diabetes, blindness, kidney failure, and peripheral nerve damage (peripheral neuropathy''''), probably due to protein glycosylation.

In respiration, through a series of enzyme catalysed reactions, glucose is oxidized to eventually form carbon dioxide and water, generate energy, especially in the form of ATP. Before use, glucose is broken down from the polysaccharide. Glucose and fructose are chemically bound to sucrose. Starch, cellulose, and glycogen are common glucose polymers polysaccharides). Dextrose solution formed by D-glucose rotates polarized light to the right. In the same D-fructose called "levulose" because the solution of levulose rotates polarized light to the left.

Sugar contained in the two enantiomers (mirror isomers), D-glucose and L-glucose, but the organism, which is found only isomer D-isomer. A carbohydrate D-shaped or L-related isomeric conformation on carbon 5. If you are in the right Fischer projection, then the form of the ring is the enantiomer D, then to the left, then it becomes enantiomer L. It is easy to remember, refer to D for "right-handed", which is the Latin root for "right" (right), while the L for "levo" which is the root of the word "left" (left). Structure of the ring itself can be formed in two ways different, resulting in glucose-α (alpha) jeungt β (beta). Structurally, glucose-α-β jeung different hydroxyl groups attached to the carbon in the ring first. Shape α has a hydroxyl group "under the" hydrogen (as molecule is commonly depicted, as shown in the picture above), while the β form hydroxyl groups are "above" the hydrogen. Two forms are formed alternately over time in aqueous solution, until it reaches a stable ratio of α: β 36:64, in the process called mutarotasi which can be accelerated.

as a result of photosynthesis in plants and some prokaryotes.
formed in the liver and skeletal muscle glycogen deposits of the solution (glucose polymer).
synthesized in the liver and kidney of intermediates through a process called gluconeogenesis.


4. Role in the metabolism

Carbohydrates are the main energy source for the human body, which provides 4 calories (17 kilojoules) of food energy per gram. Breakdown of carbohydrates (eg starch) yields mono-and disaccharides, mainly glucose. Through glycolysis, glucose is immediately engaged in the production of ATP, the energy carrier of the cell. On the other hand, glucose is essential in the production of proteins and in lipid metabolism. Because of the central nervous system no lipid metabolism, tissue is highly dependent on glucose.

Glucose is absorbed into the bloodstream through the digestive tract. Some glucose is then directly to fuel brain cells, while the other to the liver and muscles, which keep it as glycogen ("animal starch") and fat cells, which store it as fat. Glycogen is the stored energy source to be converted back to glucose when more energy is needed. Although fatty deposits can also be a source of reserve energy, fat never directly converted into glucose. Fructose and galactose, other sugars produced from the breakdown of carbohydrates, immediately transported to the liver, which converts it into glucose.