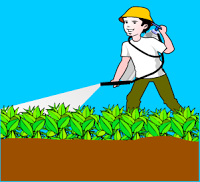 Pesticides or pest exterminator is the material that is used to control, resist, luring, or exterminate pests. The name is derived from the pest ("bugs") are given the suffix-cide ("killers"). The goal of all sorts, such as insects, rodents, weeds, birds, mammals, fish, or microbes that are considered disruptive.

Pesticides are usually, but not always, toxic. in everyday language, pesticides are often referred to as "toxic".

2.Fungisida is a pesticide to eliminate / prevent the growth of mold / fungi such as leaf spot, leaf rust, blight and leaf smallpox. Example: copper oxychloride, copper (I) oxide, carbendazim, organomerkuri, and sodium dichromate.

3.Bakterisida is pesticide to eradicate the bacteria or virus. One of the main examples is bactericidal tetramycin used to kill the virus that subjugate CVPD citrus. Most bacteria that has invaded a difficult plant to eradicate. Medications usually be given to plants that are still healthy according to a certain dose.

4.Rodentisida is a pesticide used to eradicate pests such as rodents like mice. Usually given as bait previously mixed with rice or corn. Only use must be careful, because it can kill animals that eat it too. Examples: arsenic.

5.Nematisida is a pesticide used to eradicate pests such as nematodes (worms). This type of pest usually attacks the roots and tubers of plants. Nematisida usually used in coffee or pepper plantations. Nematisida nature can poison plants, so use 3 weeks before the planting season. In addition to combating nematodes, these drugs may also combat insects and fungi. Commercially known as DD, Vapam, and dazomet.

6.Herbisida is a pesticide used to eradicate plant pests (weeds) such as reeds, grass, water hyacinth, etc.. Examples of ammonium sulfonate and pentaklorofenol.