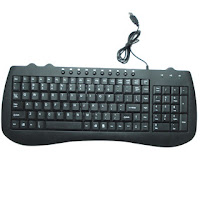 Have you ever wondered, why the arrangement of letters on a typewriter keyboard, computer, PDA until we form "QWERTYUIOP" and so on? Why not made any sequence like "ABCDEFGH" and so on? That said, the keyboard has been created since the 1860s by Sholes and Dunsmore. Initially they made alphabetically. However, gradually with increasing capabilities (custom) user, typing speed becomes faster when the mechanism of the machine while it is still simple. Consequently, (row) certain keys to frequent traffic jams and hinder the work.

Based on their experience, eventually drafted keyboard made deliberately complicated and inefficient so that the keyboard is not easily jammed. Design typewriter was sold to Remington to be mass produced in 1873. Its structure is divided into four lines, the top line of the form "23456789 -" second line "QWE.TYIUOP" third line "XDFGHJKLM", and the bottom line "AX & CVBN?; R".

Over time, technology is advancing rapidly and the problem of the keyboard keys are often jammed been overcome with better mechanical designs. A number of alternative keyboard design also appeared on the market. One that is quite popular is the Dvorak Simplified Keyboard (DSK) made by August Dvorak in 1936. The design is claimed to be a design that is more efficient, faster, and egronomis.

QWERTY actually have many weaknesses as you make a left hand overload, especially when writing in English (the same thing I felt when writing in Indonesian). QWERTY also make your pinkie overload. Research shows that the uneven distribution of the letter so that your fingers have to cross from line to line - when measured finger typists will typically run more than 20 miles per day compared to DSK that only 1 mile.

Unfortunately, people still refuse to turn away from the design of "QWERTY" although the design is not the best design. Although the technology has been able to solve the key problem of jamming, people stick with the "QWERTY" design instead of a more superior. Instead, QWERTY instead crowned the international standard in 1966.

The same thing happened in Microsoft Windows. We certainly know that Windows is not the best operating system, whether it be in terms of safety, convenience, performance, up to the beauty. However, because the market penetration of Windows is so hard, people got used to using the Windows operating system and is being standardized.

Is not nothing better than Windows? Of course not. But people need to think about it a few times before turning away from the standard. They have to face barriers such as cost factors, compatibility issues, the learning process, the time factor, and much more. As a result, the number of the faithful is much larger than the apostate. This is what makes Windows or QWERTY later became a standard - even though they are not the best.

In the scientific world, this phenomenon is described as the concept of path dependency and network externalities. In essence, innovation does not produce outcomes that out of the blue, but it is a development that could be predicted from it already. In addition, the value of innovation will be higher when used by more people. At some stage, the innovation will be the standard used by the public.