Please Share this article is useful !
In Indonesia who are not familiar with this song, this song instantly famous because of the myths associated with the song. first, for those who listen and sing this song, then when is the verse: 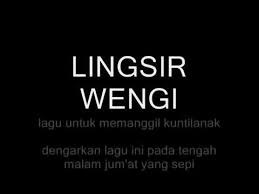 So they were singing and came to the temple on top, then those who sing it will be found by a scary creature by the name of Kuntilanak. when there are several stories of secret song lingsir Wengi when those who claim to encounter a terrifying creature, then this song was immediately popular in Indonesia with the typical scary song.

Then, if the right song is indeed lingsir Wengi can bring Satan be kuntilanak when when sung? therefore, we need to examine how the real secret Wengi Lingsir this song actually.

From several sources stated that the song was created by Sunan  Kalijaga. Lingsir Wengi  one cleric known as the guardian Walisongo famous among nine trustees island of Java for teaching kindness to introduce and teach the religion of Islam in the land of Java. Sunan Kalijaga one method of teaching is to track and apply the song in a puppet show or puppetry. it was due to craze of people around who really loves art puppet show, so in a way tersebutlah Sunan Kalijaga to convey the teachings of Islam in Indonesia, particularly in Java at the time.

Birth of song Lingsir Wengi spawned several discourses, both positive and negative. positive discourse song is a poetry as a reflection of life, steadfastness in the face of temptation both man and jinn or demons. This song also serves as a prayer to resist disasters and the song is also intended to remind people to be closer to God Almighty, so avoid disasters and problems.

So how can this song be assumed as a caller tune devil is Kuntilanak? if explored in depth the possibility of this song to be a song that is the mystery of the song lyrics and the tone that was so scary when we hear it, especially if we listen to this song and sing at night, so that fear will always come as a growing myth about this song .

However, need I remind you, that this song is not strange, no mystery caller tune and not the devil. Intrigued with this song???? Please click Download below.