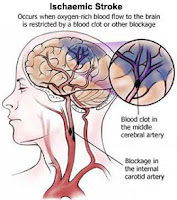 Stroke is a condition that occurs when the Part of the brain cells to die from impaired blood flow due to blockage or in rupture of blood vessels in the brain. Blood flow ceases to supply oxygen and nutrients to the brain is stopped too, so most of the brain can not function properly. Stroke by cause divided into two types: ischemic stroke and hemorrhagic stroke, which is one of the most common is an ischemic stroke.

Ischemic stroke occurs in the brain cells are deprived of oxygen and nutrients caused by a narrowing or blockage of the arteries (arteriosclerosis).

Almost all stroke survivors experience this type of stroke as a result of approximately 83% of blood flow to a portion or the whole brain to a standstill. Generally, the early symptoms of this type of stroke are often not known by the sufferer. The attacks appear suddenly and immediately cause the patient to lose consciousness.

Here are some explanations of ischemic stroke symptom onset, are:

1. Headache is accompanied by loss of consciousness, even coma (cerebral hemorrhage).
2. Weakness or paralysis of the arm, leg or one side of the body.

4. Visual disturbances (blurred eyes) on one or both eyes
5. Balance disorders such as vertigo and staggering (ataxia)
6. Numbness of the face or limbs one-sided or two-sided
7. Weakness or paralysis of the face or limbs one side or two sides
8. Lose some or all of the power of speech (aphasia)
9. Impaired memory or a new memory (amnesia)
10. Impaired orientation of the place, time and person
11. Impaired swallowing liquids or solid food (dysphagia)