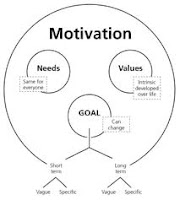 Imagine that you have just finished a goal / objective that is full of challenges, where you arrange for your own. It is a struggle, but you are still convinced that in the end you will be successful. So you keep trying. Now you've done, how you feeling? Sure glad all and followed by a sense of satisfaction and thinking "I know I can do it". Source of information on self-efficacy is a person's success in a job before. So a time of success obtained, increasing self-efficacy.

Natural consequence often occurs when students see the relevance in what they learn and have the opportunity to apply new information obtained, for example, when Sean was learning the skills needed on the job. Bates (1979) says that the only reward for participation in an activity in general has led to a reduction in the activity of the attraction itself. This is true, especially when it is entertaining or akyifitas merangang. Wise not give rewards to students to tie it with the actual work interesting. He also concluded that the reward could lead to motivation when rewards are not normally considered as intrinsic to perfoermen task.

Keller (1987) concluded that "even when people are intrinsically motivated to learn the material, it seems they are ahead of the introduction of extrinsic form. Example, public recognition of the achievements, privileges, product presentations students are enthusiastic and positive statement.

Sustainable motivation for learning is facilitated through the award of satisfaction in learning now. When students succeed in learning objectives, self-efficacy increased and they have experienced a natural consequence, the success of learning. If the natural consequence is less the case, positive consequences can occur in such a situation to satisfy a pengahrapan results.

The central assumption of attribution theory is the quest to understand the source of action "spiral of action" basis. Orangberusaha-pentebab understand the causes of success and failure, and attributions about the causes of these describes the action in the future. Winner (1985 - 1986) gave provisional assumption that there are three dimensions of attribution of cause, namely internal external opponents, opponents unstable stable, and can be controlled opponents can not be controlled.

3. the social context of motivation

Johnson and Johnson (1979) found that students' motivation is influenced by the behavior sanagt where he interacts in the achievement of targets. They describe three types of target structure that leads to a different interpersonal relationships among students. Under a cooperative arrangement objectives, students are motivated to work together because cooperation is felt the only way for them to achieve goals. Under the competitive structure targeted, motivated subjects not only work independently, but also gather resources and information. They feel that the acquisition of the target depends on the other students did not reach the target. The composition of individual targets, where students are motivated to work freely / not dependent, but not competitively, because they feel the achievement of the objectives should be directly related to their own actions and regardless of what other people do pleh.

Teachers who have high self-efficacy tend to give support / encourage their students to master and responsible. Challenge the composition of learning tasks is to help students be successful with these tasks. This action promotes both motivate students and reinforce personal teacher efficacy. Conversely, teachers who have a low personal efficacy tend to resist forms of control authority in the classroom.