10 Most Secure City in Indonesia 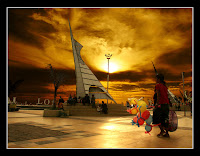 
The largest city on Sulawesi Island is located in the south-western coast, facing the Makassar Strait. Makassar Losari Beach is known for having beautiful. Makassar Strait is bordered on the west, Pangkajene Islands regency in the north, to the east of Maros and Gowa in the south. Kosmopolis the city including the city, many tribes-tribes living here Makassar, Bugis, Toraja, Mandar, and a sizable Chinese community. Typical food is Coto Makassar Makassar, Maros Bread, Cake Tori ', Palabutung, Pisang Ijo, Sop brother, and Sop Konro.


Bali is one of the provinces that have the whole island in Indonesia. Bali lies between Java and Lombok Island. Denpasar itself is located in the southern part of the island. The majority of Balinese are Hindu. In the world famous Bali as a tourist destination with a unique variety of art culture, especially for the Japanese and Australian tourists. The whole community has come to know and are proud of their native culture as Pendet dance and Kecak dance. Bali is also known as the Island of the Gods, where the people are very zealous for religion.

Medan is the gateway to the western part of Indonesia, and also as a gateway for tourists to get to the attractions in the highlands of Berastagi Karo, attractions Orangutan in Bukit Lawang, Lake Toba, and Coast Mirror, which comes with Waterboom Theme Park. Medan city famous for its harmonious multiethnic population: Batak, Indian, Arabic, Chinese and migrants from the island of Java. 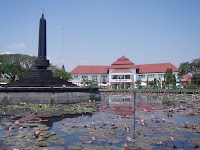 
The city is a haven and destination for shopping and handicrafts domestic and foreign tourists. Most tourist sites in East Java is in the area of ​​the former residency of Malang, but the most complete tourism facilities in the city of Malang. As the City of Memories for European tourists, especially the Dutch city of Malang still remains as excellent as many heritage buildings / buildings, parks typical colonial heritage and other historical sites still preserved by the government. 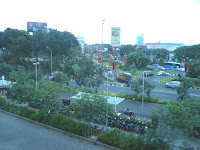 Surabaya is the second largest city in Indonesia after Jakarta. Surabaya is the center of business, commerce, industry, and education in eastern Indonesia. Surabaya known as City of Heroes because of its history in the struggle for the independence of Indonesia from Surabaya penjajah.Kata purported to be from the mythical story battle between sura (shark) and baya (crocodile). Java is the ethnic majority (83.68%), followed by various ethnic groups in Indonesia, including the Madurese (7.5%), Chinese (7.25%), Arabic (2.04%), and other tribes. 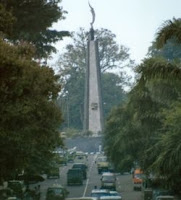 Bogor city is located 54 km south of Jakarta. Bogor city was known as the rain, as it has a very high rainfall. In the Dutch colonial era, Bogor known as Buitenzorg which means "no worries". Bogor anniversary is celebrated every June 3 as it is the day of the coronation of King Siliwangi as king of Padjadjaran. Bogor used as education centers and national agricultural research. This is where the various institutions and research centers of agricultural and biological stood since the 19th century. Bogor Agricultural University, founded in the early 20th century. 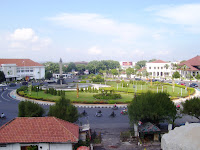 
It is located approximately 466 km east of Jakarta, or 312 km west of Surabaya. Semarang is bordered by Java Sea in the north, on the east Demak, Semarang District in the south, and Kendal in the west. Semrang inherited from the Dutch city, the Old town, the Church Blenduk as a mascot. Gajah Mada area-Simpang5-Heroes is an area suitable for a hungry stomach because there Semarang scattered native foods. Pandaran path is also provided as a special place souvenirs typical of Semarang.


This town was anciently known as Parijs van Java. Bandung is known as the place that the air is cool because it is located in the highlands. This makes the city of Bandung as one tourist destination. While the existence of public universities and many private universities in Bandung making this city is known as one of the students in Indonesian cities. Bandung is also known for its factory outlets are mushrooming, with a low price, but still qualified. 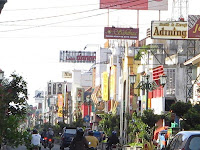 This city was once the capital of Indonesia during the revolution. Yogyakarta is the only city that leaders of the kingdom (palace) that the Sultan and Prince Pakualam. This city is a typical food warm. Yogyakarta is known as a city of students, because nearly 20% of the population is a productive student and there are 137 colleges. Yogyakarta has beautiful natural scenery-green rice fields blanketing the outskirts of Mount Merapi as the background, natural beaches are easily found in the south of Yogyakarta. Art atmosphere was felt in Yogyakarta. Malioboro, which is the lifeblood of Yogyakarta, flooded with handicrafts from all over. Street musicians always ready entertain any visitor stalls.