7 Best Jobs For The Future 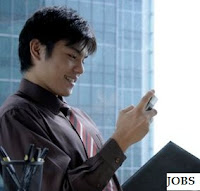 In this era of technology and computerization paced chosen profession as a promising IT is a job for the future. Works as IT is defined as a field of technology who is proficient in computing, networking, software, internet and even up to the hardware. IT professionals a lot of branches. Associated with such software; programmers, web designers, web programmers, systems analysts. Related to hardware such as; technical enginner (technician), networking engineer (network). In conjunction with the operation of information systems, for example; EDP, the system administrator. So many job options in IT, of course, is a great opportunity. And the salary of an inexperienced IT around Rp. 2.500.000, - per month.

When we observe a few years lately dental care is a very flourishing everywhere. This shows that there is definitely demand there is supply. People are in desperate need of dental care and dentist to maintain oral health. Dental profession is considered a promising profession in the future. Dental profession has existed more than 150 years ago. Demand for dental services will continue to grow in the future in line with population growth and public awareness of the importance of maintaining oral health. That a barrier is the lack of dentists who can deal with oral health for people in the area and the outposts.

Progress of the changing times demand infrastructure development both in cities and in the regions. This means that the opportunity is wide open for the engineers. Engineers work closely related to the impact of population growth on urban infrastructure, transportation, and other industries. Engineer is promising work in the future. Data in the U.S. menunujukan an increase in the number of new jobs as much as 24.1% for engineers.

Worked as a midwife is also promising a glorious job in the future. Midwives is the oldest profession in the world since the inception of human civilization and until now. Midwives assist physicians in the birth process, even now many open practice midwife or maternity clinic called Private Practice Midwives (CPM). Even the Indonesian government issued a program to improve the quality and service that is called Bidan Delima BPS.

In every company both non profit and profit certainly need an accountant to manage the company's finances, pay taxes, and other financial reports. Every day more companies are job opening for the position of accountant. Which means that the accounting profession is promising work in the future. Similarly, the auditor, a person who has the qualifications to perform the audit of the financial statements as well as the activities of one company or organization. Audit profession is also a promising work well as government auditors, internal auditors, independent auditors until the tax auditors. An accountant who had entered and inexperienced usually receive a salary of Rp. 1.900.000, - per month.

Undoubtedly surgeon profession into a promising job in the future. A surgeon or surgical specialists right now is in line with the changing times led to the emergence of various diseases are increasingly diverse. Which includes such surgeons; neurological surgeon, surgeon urology, orthopedic and other surgical specialists. Specialist doctors is still limited and only in-hospital major hospitals or government hospitals.