7 Most Wonderful Discovery of Islam in the world 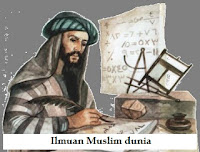 Modern life is not separated from the discoveries Muslim Scientists. The world may forget how precious heritage sciences by the Muslims.


Here's 7 Most Wonderful Discovery of Islam in the world

Abbas ibn Firnas was the first to make a real effort to build a flying machine and fly. Thousands of years before the Wright brothers flew and even Leonardo Da Vinci designed flying machine. In the 9th century he designed a winged apparatus, rudely resembling a bird costume. In the most famous trials of the Great Mosque Cordoba tower in Spain, in the year 852 Firnas hope to fly like a bird. But he swooped down with a little injury at the back of the coat because that is the first parachute he provided to protect it.

At 875, age 70 years, after Abbas ibn Firnas perfected a machine of silk and eagles feathers, he tried again, jumping from a mountain. He flew to a significant height and remained high for ten minutes but crashed on landing correctly, that it turns out he was not given the device a tail so it will slow down during landing. Baghdad international airport and a crater on the Moon is named Abbas ibn Firnas.

Many modern surgical instruments are designed exactly the same as it had been designed in the 10th century by a Muslim surgeon called al-Zahrawi. Such as scalpels, bone saws, forceps, fine scissors for eye surgery and many of the 200 instruments he designed will we recognize in modern surgical medical equipment.

Al Zahrawi published a 1,500-page book illustrated encyclopedia of surgery that is used in Europe as a medical reference in the next 500 years. Among his many inventions, Al Zahrawi reportedly doing the first caesarean section. In the 13th century, another Muslim medical named Ibn Nafis describes the circulation of blood, 300 years before William Harvey found. Muslim doctors also found the drug of opium and alcohol mixes and hollow needles to suck cataracts from eyes, this is a technique that is still used today.

Record of the early history of a pen that uses the reservoir back to the 10th century. At 953, al-Mu'izz Ma'ad, the Fatimid caliph of Egypt, demanded a pen that will not stain hands or clothing, and is equipped with an ink pen that is in the reservoir (the tube) and flows to the nib. The pen may be called a pen, but the mechanism is still unknown, and the only one that records have been found. Muslim designers whom pen itself I do not get the source. Years later reservoir pen was developed in 1636 by a German man named Daniel Schwenter.

Did you know that the Arabic language of the university is Jami'ah? You surely know that the prayer was given the name of the mosque jami '. This proves that more than a millennium ago, science and religion have been sitting side by side.

Build knowledge of Babylonian, Egyptian, Greek, Chinese and Indian civilizations, Muslims develop a culture of learning in which the inquiring mind seeking truth based on scientific rigor and experimentation. In almost every field of knowledge, Muslims make new discoveries and inventions with practical results that help develop the community.

In the year 859 young princess named Fatima al-Firhi founded the first degree-granting university in Fez, Morocco. Miriam, his sister, who founded an adjacent mosque and together the complex became Masjid al-Qarawiyyin and Universities that are still operating almost 1,200 years later. It is reminded that the people that learning is obligatory for men and perempuian which is the core of the Islamic tradition and that the story of al-Firhi sisters will inspire young Muslim women around the world today. Read: 10 Best and Famous Universities in the World.

Around the year 1000 Ibn al-Haitham proved that humans see something by the light reflected from objects and entering the eye, dismissing Euclid and Ptolemy's theories that they had previously stated that the light was emitted from the eye itself. This great Muslim physicist also discovered the camera obscura phenomenon, which explains how the eye sees images upright due to the connection between the optic nerve and the brain.

Numbering systems that exist in the modern world can not be separated from the role of a Muslim named al-Khwarizmi is recorded in a book called "Al-Jabr wa-al Muqabilah" which means "Reasoning and Balancing" around the year 825. Of books in the mathematical sciences that are named algebra used today. Mathematics book by scholars who created the zeros of India was imported into Europe 300 years later by the Italian mathematician Fibonacci. Algorithm theory and the theory of trigonometry came from the Muslim world. And Al-Kindi's discovery of frequency analysis on all of the code given the ancient world soluble and created the basis of modern cryptology.

A form of chess played in ancient India but the game was developed into the form we know it today in Persia. From there it spread westward to Europe, where it was introduced by the Moors in Spain in the 10th century and as far east as Japan. The word "castle" is derived from the Persian "Rukh", which means the trains.

Actually many Muslim scientists discovery that I can not explain, this is a great invention that was, and will always be inspiring other Muslims to emulate and follow their lead.