✖
Home Mystery Mystery of the Sea in Japan

Mystery of the Sea in Japan

Actually, there is a body of water in Japan is very dangerous for shipping and aviation activities, together with the danger of the Bermuda Triangle / Bermuda Triangle is Japan Devil's Sea / Sea Devils. These waters is an area of ​​calm seas in the Pacific Ocean, 100 km south of Tokyo, which is located between the island and the island of Miyake Ivojima, but less so than the famous Bermuda Triangle, perhaps because they are too distant from mainland Japan. While the Bermuda Triangle is very familiar to the American sailors, who in turn claimed many ships and aircraft.

Nevertheless, close to mainland Japan Sea Devils was also responsible for the loss of several ships and aircraft. Between 1950 and 1954, this area has lost no less than nine large ships without leaving a trace. The Japanese government is very much concerned about this area, and announces that he's being a dangerous area and should not be approached. In 1955 the Japanese government sent an expedition to bring the experts to the area by boat Kawamaru. Unfortunately Kawamaru vanished without a message.

An American scholar, Ivan Sanderson, who is very interested in all the weirdness, trying to see the location of the Bermuda Triangle and Devil's Sea Japan in the map. Turns out he saw that the two regions are located just underlined longitude between 30 and 40 degrees north of the equator, about the same extent (see map above). 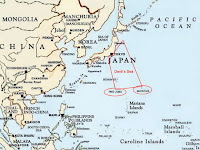 Through this conclusion Sanderson continued his observations on other matters, and he found that there are 12 regions in the world similar to it. Two of which are in the north pole and south pole, while the other ten are divided into two row, the first line of longitude located at 40 degrees north, and the second line is located at longitude 40 degrees south of the equator. Separately each of about 72 degrees in latitude. These places are in addition to the north and south poles on two, among others, are two areas located on land. One in uatara Great Deserts of Africa, and another in the mountains of northwestern India.

Sanderson observed that most of these regions are similar to each other, among other things, it lies in a region where the hot and cold currents meet, and that place is viewed as a point-node, because it directs the water flow over and under the direction opposite, and with the different temperatures, can cause magnetic waves that be the culprit for all accidents. but Sanderson's theory is not founded on a proposition.

No anything that proves that the confluence of two streams of water in the opposite direction and with different temperatures can produce magnetic waves in the earth. Furthermore, the theory fails to answer the question, why the ships became victims in places like the abandoned passengers for granted, and where did they go? So, what are the events that seemed so scary to them, so they left the boat?