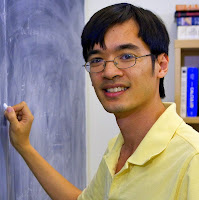 The world is only about 0.5 percent of the total human being on this earth who has an IQ above 140 is considered a category of people with genius , of 0.5 percent is one of them is Terence Tao , a man with the highest IQ in the world current and also includes one of the most genius that exist on earth today with IQ at between 230 to 240 who are under William James Sidis one of the most genius people in the world has ever seen. Terence Tao was born with the full name of Terence " Terry " Chi - Shen Tao on July 17, 1975 in Adelaide , Australia .

According to Smithsonian Magazine online , Tao can perform basic arithmetic at the age of two years . When asked by his father how he knew numbers and letters , she says she learned the show Sesame Street . In addition to intelligent English , Tao speaks Cantonese are also good , but can not write in Chinese .

Terence Tao exhibit extraordinary mathematical abilities from an early age , he studied mathematics at the university level age nine . He is one of only two children ( besides Lenhard Ng ) in the history of study of Johns Hopkins ' remarkable talent program which can achieve a score of 700 or higher on the math portion only at the age of 8 years ( he scored 760 ) . In 1986 , 1987 , and 1988 , Tao was the youngest participant to date in the International Mathematical Olympiad , and first competed at the age of ten years , he won the bronze, silver , and gold medals . She remains the youngest winner of each of the three medals she won in the history of science olympiad . He won an Olympic gold medal when he was barely old mathematics fourteen years . At age 14 , Tao attended the Research Science Institute meeting . 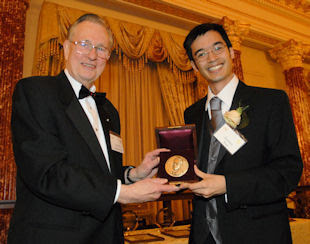 When he was 15 he published his First Paper . He received a bachelor's degree and a master's degree at age 16 from Flinders University . In 1992 he won a Fulbright scholarship to do postgraduate studies in the United States . From 1992 to 1996 , Tao was a graduate student at Princeton University under the direction of Elias Stein , and Tao received his Ph.D. at the age of 20 years . He taught at the University of California , Los Angeles in 1996 . When he was 24 , he was promoted to professor at UCLA and remains the youngest person ever appointed professor by the institution .

Tao has won many awards . He Salem Prize in 2000, Bôcher Memorial Prize in 2002 , and the Clay Research Award in 2003 , for his contributions to analysis including work on the Kakeya conjecture and wave maps . In 2005 , he received the American Society Mathematics Levi L. Conant Prize with Allen Knutson , and in 2006 he was awarded the SASTRA Ramanujan Prize . In 2004 , Ben Green and Tao released what is now known as the Green - Tao theorem .

Tao was a finalist for Australian of the Year award in 2007 . He is a corresponding member of the Australian Academy of Science , and in 2007 was elected as a Fellow of the Royal Society Australia . In April 2008, Tao received Alan T. Waterman Award , which recognizes an early career scientist for outstanding contribution in their field . Besides medals , waterman awardees also received a grant of $ 500,000 to further research . In December 2008 . Tao was also elected a Fellow of the American Academy of Arts and Science in 2009 . In 2010 , he received the King Faisal International Prize jointly with Enrico Bombieri Also in the year 2010 . In 2012 he and Jean Bourgain receive Crafoord Award in Mathematics from the Royal Swedish Academy of Sciences . Also , in 2012 , he received an award from the Simon Foundation . In 2013, Tao has published over 250 research papers and 17 books .