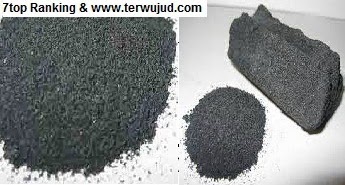 Carbon is the chemical element of atomic number 6 and atomic mass 12.011115 very abundant in the universe . Elemental carbon is known to have a variety of uses for human life . Scientifically carbon is defined as non-metal elements , marked by a form of carbon black charcoal , graphite shape with gray , pure diamond shape , and colorless (clear ) .

In carbon science has unanalyzed Melting point 3500 ° C and a boiling point of 4,200 ° C. Carbon has been known since pre -historic times . Carbon derived from graphite or diamond and often combined to other elements in the carbonate , petroleum , coal , bitumen and natural gas .

Elemental carbon is believed to be related and consistent with other elements , carbon relevance to the relationship in other elements to form compounds that are useful and carbon compounds are often found in carbon monoxide or CO is carbon dioxide or CO2 and . So what are the benefits of carbon for our bodies , the following explanation :

1 . Macronutrient
Carbon serves as a useful and macronutrient for the body in the form of carbohydrates . this can be known with evidence that any part of the human body is composed and require large amounts of this element .

2 . Ecosystem Growth Body
Carbon is an important role as a complex process of life . Carbon element in the human body with many other atoms bonded so as to make the body function and help growth . Besides that, in the analysis proved that nearly 18 % of the human body consists of carbon Elements .

3 . Physiology Body
Elemental carbon is also the basis of proteins , fats and nucleic acids found in the human body . This means that carbon has an important role in the physiology of the human body .

5 . Metabolism
Almost all the activities are taking place in the body's metabolism , and it also involves carbon as a basic component . concrete evidence is one of the hormones and enzymes that contain carbon .

6 . Medication
Activated charcoal on the carbon element can be used as a treatment to absorb various toxins or gases produced in the human body .