BIOGRAPHY
Abanda Herman is a football player from Cameroon. He was born in Younde on 20 February 1984. He currently plays for participants of the Super League team Persib Bandung Indonesia, and plays as a Defender. Players who have a 192 cm high is indeed one of the central pillars are irreplaceable in the heart of the defense team Maung Bandung (nickname for Persib Bandung). 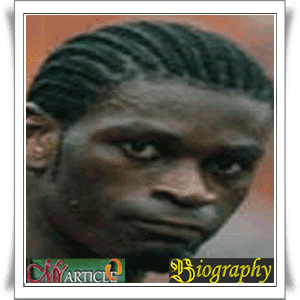 He became the only foreign players last season were maintained Coach Djadjang Nurdjaman to strengthen his squad in the Indonesian Super League (LSI) 2012/2013. That means, Djadjang still need a big role Abanda to fortify the back line PERSIB.

Abanda is a figure of loyal players. He said that Arsenal are already defended in the past three seasons to be a part in his heart. Arsenal is the fourth club since doing business in Indonesia in 2004. Previous Abanda was costumed PSM Makassar (2004-2005), Persija Jakarta (2006-2010), and Persema Malang (2010-2011).

He never holds the status as the most expensive foreign players. Persija priced Abanda worth Rp1.35 billion. That figure was only 200 million of this season's most expensive player, Bambang Pamungkas, Liverpool striker. However, it is not easy. When I first played in Indonesia he only gets a monthly salary. Abanda only paid Rp 25 million per month.

Thanks to maintain discipline in defense and foresight gastric bait in front of goal made increasing the resale value. Although the status of the player deep pockets, do not create glare Abanda sparkling treasures and live like most other players. Famous player quiet it chose to save the money he gets from the gridiron. Some were sent to his family in Cameroon.