BIOGRAPHY
Tun Abdullah bin Haji Ahmad Badawi was born in Bayan Lepas, Malaysia, on November 26, 73 years ago, or more precisely in 1939. The name statesman who gained the nickname Mr. Nice Guy is already very familiar not only in the ears of Malaysians, but also Southeast Asia, and even internationally. Pak Lah, so Ahmad Badawi also familiarly called, is the highest political office holders as Prime Minister in Malaysia fifth (2003-2009).

Political career alumni of the University of Malaya and University of Cambridge began with a position as Head of the Ministry of Youth and Sports Malaysia. And since terminate his position in the ranks of this department, the political career Ahmad Badawi as streaking in the next 20 years. Had served as Minister in the Prime Minister's position in the period 1981-1984, statesman recipient of a series of national and international awards are then sworn in as Minister of Education in 1984 and continued as Secretary of Defense in 1986 to 1987. 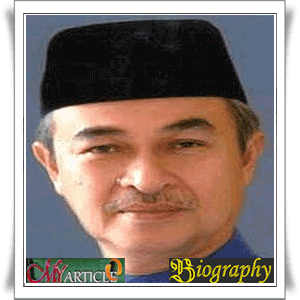 1990s until the end of 2010 and is the most brilliant period in the political career Ahmad Badawi. Still believed to be the Vice President of UMNO (held since 1988), Badawi was sworn in as Minister of Foreign Affairs and Minister of Home Affairs of Malaysia, two of the most important positions and the highest and most long-held Badawi, 1991 - 1999. The highlight of the political career Ahmad Badawi achieved when he obtain the highest confidence of all the people of Malaysia to lead the country as Prime Minister from 2003 to 2009.

Known controversial cases related to feud with his predecessor, former Prime Minister Mahathir Mohamad, Badawi also suffered the trials of life in another form when left Endon Mahmood died in 2005, a woman who for 40 years assisting political lunge Badawi as his wife. Two years later, the Prime Minister is remarried with Jeanne Abdullah and build a family together two biological children and two stepchildren.