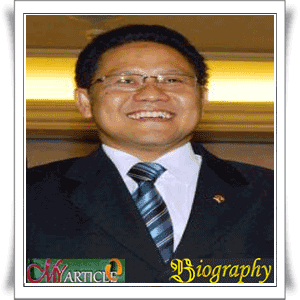 Ahmad Muhaimin Iskandar is one of the politicians and activists who are very concerned about the struggle for democracy. He was very active since becoming a student at GMU and PMII against authoritarianism and centralization. Muhaimin very fond of field journalists, even post-graduate took a communication management program at a State University in Jakarta. As container struggle, political career began when he was with the NU senior co-founded the National Awakening Party. After becoming Secretary General of the CBA, then he became a member of the House of Representatives as a floor leader. Then he served as Chairman of the Board Tanfidziah PKB 2002-2007 period.

The father of three children had also been a lead Indonesian Islamic Students Association (PMII) in 1994 to 1997. Other positions he has ever accomplished is to become Vice Chairman of the House of Industry Coordinating trade and development. Career man who is often called by the name of Gus Imin or Cak Imin increasingly uphill. Now he served as Minister of Manpower and Transmigration (minister) since 22 October 2009. Currently undergoing fit and proper test, the President directed that the former Vice Chairman of the 1999-2004 Parliament is directed to improve the quality of human resources. SBY also mandates that attention to education with the world of work so as to produce workers who dominate the field.

As a minister, he was very concerned with the lives of the employees in Indonesia. On the issue of outsourcing, he saw the very vague term. Moreover, the industrial relations system the last few months the union rejected it, actually nothing in the Act No. 13 of 2003 on Manpower. Cak Imin hope, all parties, including the media, no longer use the term outsourcing or outsourcing. In addition, he is also fighting for the workers who are persecuted. Muhaimin sent a letter of protest to the task force of Indonesian workers in Malaysia because there is one of the maids who are raped. He protested workers who performed the rape incident Malaysian police officers. Although the perpetrators have been arrested, Muhaimin continue assistance to Indonesian citizens who work in Malaysia is also a lawyer.

Muhaimin including a senior politician in the House, he was elected for the second time, since the House of Representatives 1999-2004 period to the 2004-2009 period. It shows Muhaimin still loved by his constituents and become a mouthpiece for the people. In Parliament, according to Iskandar, he will try to fight for the House into the motor renewal of the constitutional system. For men born in Jombang is, life is a struggle. Life is to be useful for other humans. Meanwhile, on the sidelines of his work, he still found time to write and read even a few books have been written.

He still took time to fill in a few radio shows him as the main consultant. On the other hand, his success is inseparable from the role and support of the family. Not surprisingly, on the sidelines of his spare time, Muhaimin always spend time for the family.