BIOGRAPHY
Ali Sadikin or better known as Bang Ali, born in Sumedang, West Java, on July 7, 1927. He was a lieutenant general of the Corps Navy mandated by President Sukarno in 1966 to become the Governor of Jakarta. Prior to his appointment as Governor of Jakarta, he also served as Deputy Chief of Naval Staff, Minister of Marine Transportation Cabinet Work, and Coordinating Minister for Maritime Compartment also called Sea Transportation Cabinet Minister Dwikora. If he has a call Bang Ali, his wife, Mrs. Sadikin Nani, who is also a dentist, often called Mpok Nani olek Jakarta residents. 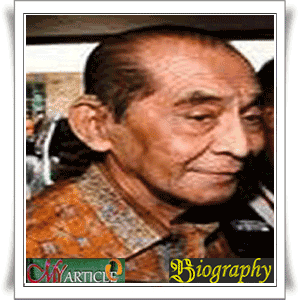 In his career as Governor of Jakarta, he participated in the development penggagasan Taman Mini Indonesia Indah (TMII), Taman Ismail Marzuki, Taman Impian Jaya Ancol, Jakarta Fair, and some other famous places. In addition, he also initiated the construction of several museums such as the Museum The square, Textile Museum, Museum of Ceramics, and Puppet Museum. He was also instrumental in the restoration of historic buildings, such as the Building and Building Juang 1945 Youth Pledge.

As Governor of Jakarta that time, Bang Ali also consider the lives of the artists who have elderly in the city at that time many who live in the tank, so that the region is named Tangkiwood. Under the leadership of Bang Ali, the city is often used as the host for the implementation of National Sports Week (PON). Not only that, Jakarta contingent also often become the overall champion.

In addition to bringing a lot of success for the city, he was also made a controversial policy. The policy was developed nightclubs and legalized gambling in the city of Jakarta to collect taxes from the venue to the development of the city. He also opened the complex Kramat Jati as brothel. The controversial policy is not separated from the problem of the lack of budget for the construction of the Regional Government of Jakarta. In addition, Bang Ali also organizes and Abang None Jakarta. He put an end to the post of governor in 1977 to be replaced by Lt. Tjokropranolo.

Right on Tuesday, May 20th, 2008, Bang Ali breathed his last in Singapore. Bang Ali is survived by his wife who is married to his second wife after the departure of the first Mpok Nani, and five children. Bang Ali's body was buried in a common grave Land coachman.