BIOGRAPHY
Diane von Furstenberg is a famous clothing designer to design the wrapper dress. Born with the name Diane Simone Michelle Halfin in Brusells, Belgium, his father was a Romanian descent Leon Halfin who moved from the province of Bessarabia, Romania to Belgium. 18 months before Diane was born, his mother, Liliane Nahmias, was in Auschwitz, making Diane became one of the direct descendants of Holocaust survivors. Diane took many lessons from his mother, one of the words of his mother "fear is not an option". 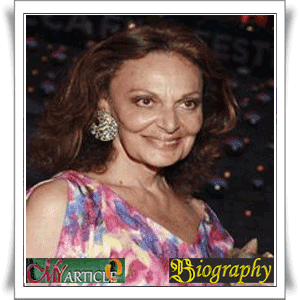 Diane studied economics at university Geneva in Switzerland. After it moved to Paris and worked as an assistant of clothing photography agent, Albert Koski. Diane moved from Paris to Italy to work as a pupil of Angelo Ferreti where he learned about how to cut, color, and other types of fabric. In 1970, Diane began designing women's dresses.

In 1974 also, Diane launched cosmetic product named "Tatiana", which is named after his son. After the phenomenal success on the dress design, Diane appeared on the cover of Newsweek magazine in 1976. The magazine Diane as "the most successful woman in the market after Coco Chanel". In 1985, Diane moved to Paris to launch "Salvy", a French-language production house. Diane also started launching many cosmetic products and other garments. Diane relaunched the company and return success.

In 2010, Diane won the Gold award from the annual gala Queen Sofia Spanish Institute. In 2011, DVF, production introduces a collection of wrapper and its flagship perfumes, DIANE. The designs have been widely worn by Michelle Obama, Catherine, Duchess of Cambridge, Gwyneth Paltrow, Kate Beckinsale, Madonna, Jessica Alba, and Jennifer Lopez.