BIOGRAPHY
Fauzi Bowo Djohari birth of the couple and Nuraini on April 10, 1948 in Jakarta. Java-blooded man Betawi graduated from primary school level in SD St. Bellarmine Then he continued his education and upper secondary level in Jakarta Canisius College. After completing his high school education, he took the field architectural studies and Regional Planning from the Technische Universität Braunschweig, Germany and graduated 1976. Doctoral Program of Technische Universität Kaiserslautern, the planning completed in 2000.

She has a hobby of reading and photography. Since the students he has also been active in various organizations. When at UI he was one of the activists WE Faculty of Engineering UI (1966/1967). When studying in Germany, he was also active in the organization of Indonesian Students Association in West Germany. 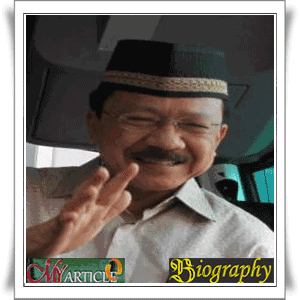 In addition to student organizations, he is also active as a member of the Youth Advisory Council KNPI 1982-1984 Center. He is also active in Kosgoro and Golkar. In fact, he had served as treasurer of the city Golkar DPD for 10 years (1983-1993). Typical man with mustache, started his career by teaching at the Faculty of Engineering, University of Indonesia. He worked as a civil servant since 1977. Some of the positions he held, among others, is never as Bureau Chief of Protocol and International Relations and Head of the Tourism Office of Jakarta. As a bureaucrat, Fauzi has taken Sepadya (1987), SESPANAS (1989), and Lemhanmas KSA VIII (2000). He is the deputy governor of Jakarta in the leadership of Governor Sutiyoso.

For 13 years, it was Fauzi Bowo performance continues to increase. Therefore, during the reign of Governor Surjadi Soedirdja (1992-1997), he is believed to occupy the post of Head of the Department of Tourism. Because pretasinya that keeps resounding, in the leadership of Governor Sutiyoso (1997-2002), he was given a position as Regional Secretary (Sekwilda).

Actually Fauzi Bowo has a chance to run for governor of the period 2002-2007. He had asked his supporters became a candidate for governor in 2002, but they are wise to follow the revolving process, ultimately he chose Sutiyoso nominated paired with PDI-P and Golkar. The decision he is familiarly called the governor could make PAN and some other smaller parties who propose him as a candidate for governor disappointed. However, when running in the elections of 2007, support for the governor actually increasing. A total of 20 political parties who are members of the Coalition Joint support a man fluent in Inggiris, Dutch, and German.

The slogan Jakarta for All was able to attract public sympathy capital city. "To build Jakarta, leave it to the experts and to the experienced. If not, the destruction of a matter of time. "The sentence is uttered repeatedly by the governor during the campaign and proved able to gain a voice at once won the election last August 8, 2007. As a result, Fauzi Bowo is paired with the vice governor was elected as a couple Governor and Deputy Governor of Jakarta 2007-2012.

Many contributions that he gave to the citizens of Jakarta during his tenure as governor. Such as organizing car-free day on Sunday in several areas in Jakarta. Building the East Flood Canal (KBT) in the North and East Jakarta. Of health, maintaining achievements no Extraordinary Events (KLB) diarrhea for three years. In terms of economy, city budget doubled. And many other achievements.

Fauzi also wants to continue his post in the period 2012-2017. But he had to deal with a lot of new faces in the world of politics. Salahs atu closest rival is the mayor of Solo, Joko Widodo. Despite yesterday's defeat in the elections did not make Fauzi despair. After serving as Governor of Jakarta, Fauzi Bowo not only spend time to relax. Typical man with thick mustache was busy preparing the establishment of research institutions to urban problems.

Currently, Fauzi Bowo was concentrating to institute named 'Strategic Center for Urban Issues and Problems'. He said the agency will discuss the problems of urban and urban areas. Institutions that will be made is also intended to build a network (networking), both in the country and especially abroad. Where the latter, researchers from outside the country can be engaged to conduct research and study of the problems that exist in cities in Indonesia, especially in Jakarta. Fauzi Bowo married to Hj. Sri Hartati on April 10, 1974. From this marriage, couples Sri Hartati Fauzi Bowo and blessed with 3 children, namely Humar Ambiya, Esti Amanda and Dyah Namira.