Marine biologist Rachel Carson was born in a village in Pennsylvania on May 27, 1907. His dream since childhood was as a writer populer. the age of 10 his first story published in the St. Nicholas. Rachel then continued his education at Parnassas, then moved to Pennsylvania College (now Chatham College name). Initially, she majored in English, but then Rachel change course to biology and completed his studies at the University John Hopkis. 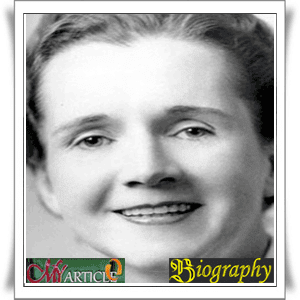 Rachel began her career in Massachusetts as a staff member in Biological Laboratory Woods Hole Marine.Rachel also teaches at Johns Hopkins and Maryland University. In 1936, she became a writer in America Advertising Bureau. A few years later, she was promoted as a staff biologist. In 1949 Rachel has managed to occupy a position as chief editor.

With his position as chief editor, Rachel into a writing career is growing rapidly. After World War 2 Rachel spent many years writing book marine. In 1951 his book The Sea Aroun Us success in the market. In fact, this book could survive at the top as the bestseller New York Times for 86 weeks. Pursue writing career, she was willing to remove the post of chief editor in 1952. Then Rachel prove the existence and competence in the world of writing.

In 1955, she scored a success with his book The Edge Of The Sea, then in 1962 his book Silent Spring also become a phenomenon in the United States, this book also did not escape the attention of John F. Kennedy. This makes Rachel increasingly famous and recognized in America. Had been recruited by CBS to hold a television show that investigated Rachel's writings. Rachel existence increasingly evident with him as ambassador at the academy of arts and Sciences in America but unfortunately Rachel died of cancer in 1964.