Please Share this article is useful !
Bombardier Beetle~Ever see the movie titled "ALIEN vs. Predator"? There described the aliens can remove all objects blister fluid, but the alien itself (as a source of liquid TSB) does not blister. Well actually there are animals in the real world that has similar capabilities as it.

Bombardier beetles are ground beetles (Carabidae) in the genus-genus Brachinini, Paussini, Ozaenini, or Metriini (more than 500 species). Named "bombardment" because their defense mechanisms, namely: when disturbed, they sprayed the chemical liquid heat from the tip of their abdomen, with a pop.

Bombardment beetle looks like a weak prey for many predators, but every threat that comes to these beetles, can trigger a backlash in the form of belly bomb. This beetle has developed a complex and effective way to make enemies go away. When in danger, beetles bombardment can fire heat corrosive chemicals from the tip of her abdomen that can burn skin and blinding the enemy.

This fluid is produced by a chemical reaction between two compounds, hydroquinone and hydrogen peroxide, stored in a separate pouch in the stomach beetles and mixed when needed in the third chamber with water and catalytic enzymes. The heat of reaction makes the mixture reaches the boiling point of water and produce gases that drive ejection. The damage caused can be fatal to insects attacker and other small creatures and painful when exposed human skin. Some of the bombardier beetle can direct spray over various directions.

HABITAT
Bombardier beetles inhabit most of the continent, except Antarctica. They usually live in forests or grasslands in temperate climates, but can be found in any other environment if there are damp places to spawn.

Behavior
Most of the bombardier beetle species are carnivores, including larvae. Beetles usually hunt other insects at night, but usually often gather with other beetles of the species when not actively searching for food. Beetles bombardment using "chemical weapons" just to survive. When foraging, he uses a very sharp jaws for cutting and slicing worms and other small insects.

Defense mechanisms
Both compounds chemical reactants, hydroquinone and hydrogen peroxide, which is secreted by special glands and stored in a separate bag on the back end of its abdomen. When threatened, the beetle  muscles that open the container valve and force the two reactants into the mixing chamber lined with thick-walled cells that produce enzymes including catalases and peroxidases. 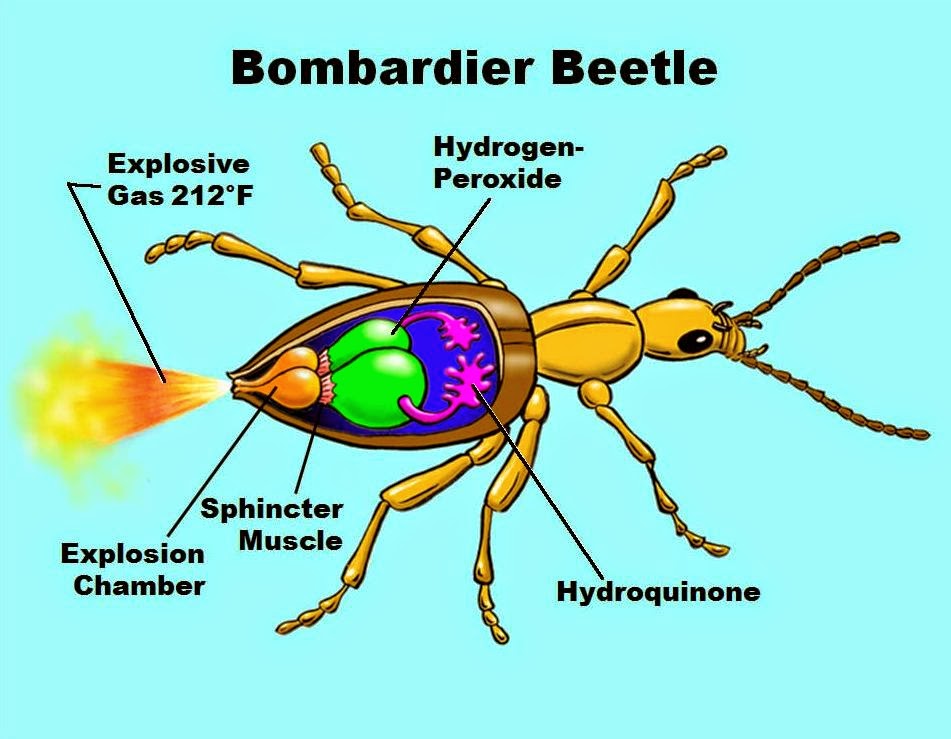 In the mixing chamber, the enzyme-enzin quickly break down hydrogen peroxide, release free oxygen and catalyze the oxidation of hydroquinones into p-quinones. This reaction is highly exothermic, and the energy released increases the temperature of the mixture to near 100 ° C, vaporize about a fifth. The resulting buildup of pressure forcing the inlet valve of the reactant storage space to cover, thus protecting the internal organs of beetles. Foul-smelling liquid and boil it partially into the gas explosively expelled through the outlet valve, with a loud popping sound. 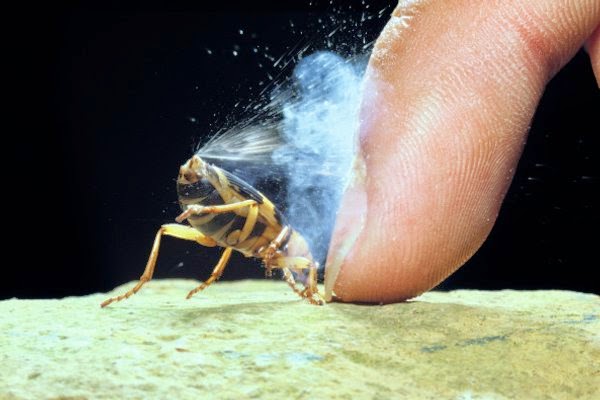 The flow of reactants into the reaction chamber and subsequent ejection occurs in a series of about 70 beats, with a rate of about 500 beats per second. The entire sequence of events requires only a fraction of a second. Usually beetles move her body so as to direct the spray to anything that triggers a response. But the gland openings of several African bombardier beetle can rotate up to 270 ° between his legs, and spraying in all directions with sufficient accuracy. With such a strong defense, beetle bombardment never have to fly to get away from danger. In fact, this creature wing box has been fused to form a solid shield on his back.

Great enemy
However, at least one creature in the wild that have learned how to beat beetle bombardment. Grasshopper mice will lock back into the ground so that the spray beetle beetles will not burn.