Please Share this article is useful !
Tiger robbery (Rampogan Matjan) is a show on the era around the 1900s in the form of a tiger slaughter. The show is believed to be the first cause of the shrinking population and accelerate the extinction of the Javan tiger.

When the show is held, the tiger released into the arena, while around him tightly surrounded by people who carry spears. When the tiger tried out of the arena and was about to break through the fence man, then dozens of spear pierced into the body of the tiger apes. Then he bled to death.

Javan tigers are not only the victims, but all the big cats who gets caught up in the forest such as leopards and panthers (except domestic cats). As a result, in 1950 reported the number of Javan tigers that live in the forest just a 25 head only. Later in 1980, the IUCN formally stated that the Javan tiger have become extinct and unquestioning. Javan Tigers are now legendary truly memorable stay. 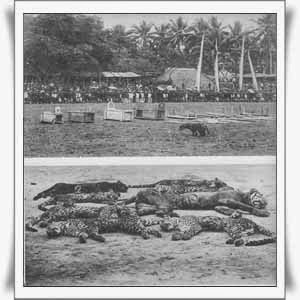 Rampogan Matjan is the first cause of the Javan tiger (Panthera tigris sondaica) deliberately hunted to be used as a media show. In contrast to the way a tiger trap farmers to save their livestock.

Today, in the island of Java is really no tiger stripe, except tiger imitation. Although some researchers such as Revelation Giri Prasetyo and Didik Raharyono denied yet extinct Javan tiger, but to this day they have not been able to show evidence of recording or photo Javan tigers alive as evidence that the Javan tiger kingpin still the king of the jungle on the island of Java.