Causes of Disease of Hyperthyroidism


Please Share this article is useful !
Hyperthyroidism is a type of disease caused by overfungsional or overproduction of the thyroid gland, in addition Hyperthyroidism is generally related to the clinical state of thyrotoxicosis. If the disease thyrotoxicosis this means that hyperthyroidism is known with the arrival of the signs due to excessive hormone, for example, the agency continues to decline aka skinny, palpitations, bulging eyes, nervousness, and so on.

According to Edi July Tri Tarin a endocrinologists from Faculty of medicine-RSCM through the media compass Health stated that the increase in metabolism is one atu symptoms of hyperthyroidism. Hyperthyroidism is a specific condition that there is excess thyroid hormone production and distribution. This is in contrast with tiroitoksikosis, although there are similarities but tiroitoksikosis an excess of thyroid hormones which are not always produced the thyroid gland. This hormone can be produced by other glands to grow, but can also produce thyroid. Both types have the same symptoms, namely an increase in the metabolic rate of the body.

Tri July Edi Tarin also explained that until now still not known why the initial cause of the production and distribution of excess thyroid hormone can, however there are some circumstances that can lead to changes in thyroid hormone production and distribution, ie Graves' disease and TMNG (Toxic Multinodular Goiter). So what are the causes of disease emergence of hyperthyroidism? Here's the explanation: 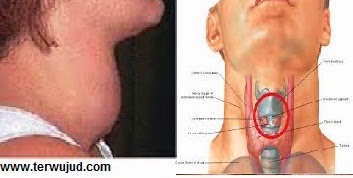 1. Graves Disease
Graves is a disease that causes hyperthyroidism are often encountered. Signs and Symptoms of Graves' disease is due to the enlarged thyroid gland evenly and lack of ability to respond to the control of TSH. Graves' disease usually occurs in derivatives and women generally 5 times more susceptible than men Graves disease. The cause of Graves' is an autoimmune disease in which antibodies are found in the circulatory system, namely thyroid peroxidase antibodies (TPO), thyroid stimulating immunogliobulin (TSI antibodies), and TSH receptor antibodies (TRAb).

2. Toxic Nodular Goiter
Toxic Nodular Goiter types of diseases characterized by the form of lumps in the neck due to enlargement of the thyroid which is shaped like a solid seed with a certain amount. The lump sums can be one with the shape of the seed (single nodule) or more than one (multinodular).

3. Production of abnormal TSH
Production of abnormal TSH or not in accordance with its normal capacity will cause tumors found in the pituitary gland that can make produce excessive TSH, if it happens, then it is this which makes the stimulation of the thyroid gland secrete T3 and T4 more than normal and Circumstances this comes along with other hormonal disorder that is also produced by the pituitary.

4. Consumption of excessive iodine
In the smelting process systems in the body, a process that uses iodine the thyroid gland to make thyroid hormone, when consuming too much or excessive iodine, then this will cause hyperthyroid disease.

Thus the article on Causes of Disease of Hyperthyroidism, know and understand the causes of this disease is the appropriate action to avoid even as early as possible to prevent the disease. Thank you!