Please Share this article is useful !
Genderuwo aka ghosts are spirits in Javanese mythology who believed that mischievous toward humans. In some areas of Java's ghost has the title assortment, for example: gondoruwo, devils, Gandharva, gandaruwa, and there is also a call gendruwes (genderuwo's grandfather). Gondoruwo described as a tall man with the body of a large gorilla and hairy and only male. While the female is called Wewe Gombel genderuwo.

Genderuwo believed to come from the spirits of humans that death is not perfect, such as the death of the accident without the right funeral procession. In addition, the corrupt and those who like to squeeze and evil people in his lifetime is also believed to be genderuwo if the deceased later. Because of his lifetime mischievous, then after death also those people also mischievous creatures in the form of genderuwo. Well, what are ghosts genderuwo annoyance? Here I will explain the story by grandparents in the area of Java. 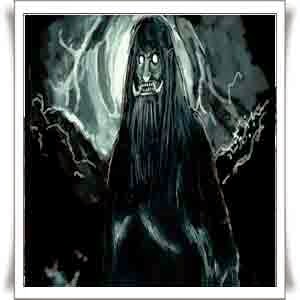 3. Genderuwo wife irritate people
If you are a woman whose house edge is often left to the village and your husband go out at night, be careful you do not get tricked by genderuwo. Genderuwo usually like meyamar as your husband and batminton invite you to play in front of the TV. Glodak, glodak, krusek, so sound batmintonnya approx.

4. Genderuwo like to eat sticky rice
If there are small children or adults are stolen genderuwo, people usually look for a rollicking, banging kitchen utensils and yelled for the child who is stolen, saying that the child's mother to cook sticky rice at home.

Heard a voice that said there were cooking sticky rice, then immediately release the child genderuwo stolen to quickly seize the sticky rice cooked by his mother stolen child. Finally, the child can be seen by the people who seek it.

5.Genderuwo like satay crow
Some people who like "Nepi" to ask number 1 usually burn flesh crow in the cemetery or place suspected genderuwonya. After smelling the savory satay crow genderuwo would appear to require the sate rations. Then people will give satay crow calling on the condition genderuwo should give n0m0r ji * tu.

6. Genderuwo like porridge (cake lunkhead typical Java)
If you burn satay crow at night, sometimes genderuwo will ask your satay and replace it with a cake porridge. If you agree, then it will be eaten by crows satay genderuwo and you will be given the one big bowl of porridge cake that you can eat. But usually in the morning, people who eat porridge innate genderuwo will actually vomit because they ate porridge overnight is not a cake, but cow dung aka "tlethong". Angelina ... kapokmu anytime!

7. Genderuwo like to wait wasps gung
If you see a pile of forest bees commonly called "wasp gung", then maybe that mbaurekso genderuwo aka herding wasp. Be careful you do not arbitrarily download wasp gung night in the woods than you are visited by ghosts who tinngi genderuwo big and sinister.

8. Genderuwo like waiting for a big tree
If there is such a large banyan tree, jackfruit, saman, teak, and so on, you do not carelessly pee under the tree. If the tree is no genderuwonya, maybe you can not pee when I got home and felt excruciating pain in the bladder. We recommend that you do not piss carelessly if're in places that you do not recognize.

9. Genderuwo can mendem gadung
The farmers usually burn the ancient yam (a kind of intoxicating poisonous tubers) and placed under the hut where he slept the night in the fields. If there genderuwo farmer who wants to steal the pack, it failed because genderuwo smell the savory roasted yam. So genderuwo the fuel consuming yam and yam aka mendem finally drunk.

10. Genderuwo can move people to sleep
If there are children sleeping in broken, mosque or the mosque, while he did not wash his feet first, then maybe genderuwo will move it to the edge of the well. When he wakes up it will find himself sleeping on the tile next to the well. Genderuwo intends for the child to take a shower in the well if you want to sleep in the mosque.

But there are some people who say that it is not the act of genderuwo, but the act of a Muslim jinn who does not like children to sleep in a mosque in a dirty state. Whatever you want to believe that where.