Please Share this article is useful !
In 1969, a haunted cemetery at Highgate Cemetery in London, England, reported frequent sightings of ghosts creepy vampire. Evil vampire who tried to terrorize the citizens often cross in the cemetery.

Some animals die mysteriously with a torn jugular like canine beast bites. Some tragic events continue to occur pet.

Then some witnesses said there were sightings of big tall dark figure with an aura radiates evil and hypnotic eyes. 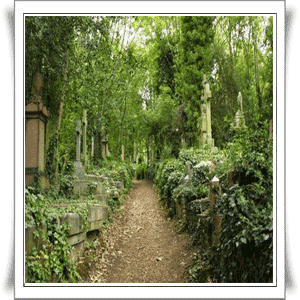 A man reported that he became confused while trying to leave the cemetery. Then he finds himself face to face with a figure of highgate vampire who glared at him, and moments later the hulking figure disappeared.

The press reported a group of people who self-proclaimed "vampire hunter force" which came cemetery, they destroy and trample some tomb thought to belong to a vampire.

They dug some graves and burial area closes as "closed to the public" night. Finally, reports of sightings and attacks decreased vampire.