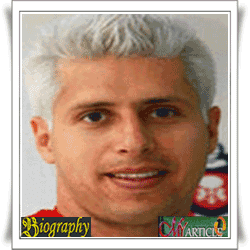 Adolfo "Bofo" Bautista Herrera was born on May 15, 1979 in Dolores Hidalgo, Mexico, is a football player who plays as an attacking midfielder currently join the club Guadalajara in the Primera División de Mexico. Initially he played in amateur leagues in Dolores Hidalgo, Guanajuato San Diego Union and San Miguel de Allende. He played at the age of 16 years. Bautista joined Tecos UAG for four years from 1998 to 2002.

End of 2002, Bautista transferred to Monarcas Morelia and last up to two seasons. There he became one of the most important players. He several times to move the club. In 2003 he transferred to C.F. Pachuca. In previous club he often performed, but in this club most of his time was spent on the bench. Bautista did not despair, he hero who brought Pachuca won.

After a long transfer period, he moved to Guadalajara in 2004. In his first season, Bautista scored nine goals in 19 games and was the top scorer in the team. In 2005, he participated in the Copa Libertadores Cup where they are most striking victory was against Boca Juniors.

Bautista sold to Chiapas in August 2007. There, he only played eight times out of 17 games. The end of 2009 he returned to join the Guadalajara. When in the club, the Mexican national team squad on loan Gallos Blancos. In 2012 he plans to retire. But as it gets attractive offers from Lobos de la BUAP made him the discouraged.