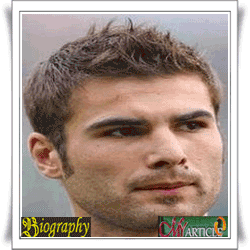 Adrian Mutu was born on January 8, 1979 in Calinesti, Arges County, Romania. He is a striker and attacking midfielder Romanian nationals. Mutu started his professional career with the club Arges Pitesti to debut on March 15, 1997. Its success has scored 14 goals in 41 appearances made directly drawn by Dinamo Bucharest with the transfer of US $ 922 thousand.

The triumphant appearance in Romania's major club had 22 goals in 33 games. His role is big enough to help Dinamo become champions and the Romanian Cup. Then Mutu joined Inter Milan in mid-season with a transfer fee of 6.5 million euros. His debut with a scintillating run scored after a new entry for 9 minutes when against AC Milan and helped Inter win 3-2.

In 2000, he was loaned out to Verona before finally officially transferred to the cost of 4 million euros. And in the 2001/02 season Parma bought it for 10 million euros. In 2003, Chelsea bought it for 29.4 million euros which made him the most expensive in Romania at that time. In his first three games, Mutu scored four goals. But after that he had trouble scoring. Its difficult to grow in the 2004-2005 season, Mutu at odds with the current coach, Jose Mourinho, who accused him of feigning injury after a match in the World Cup qualifying opponents Czech Republic.

In September 2004, Mutu failed a drugs test for cocaine and was fired. He was also suspended for 7 months until tanggl May 18, 2005 and fines from the English FA. On June 6, 2008, Mutu FIFA ordered to pay 9.6 million pounds to Chelsea, as the club's transfer fee compensation issued to him. His lawyer announced that it will oppose it in civil court fines. But the result is the fine went up to 13.68 million pounds. Quality finally signed a five-year contract with Juventus on January 12, 2005, although only be played May 2005. On July 8, 2006, Fiorentina bought for 8 million euros.

This displacement reunite with his old coach while at Parma, Cesare Prandelli. Quality back into a productive scorer along with Luca Toni and both scored 32 goals in the 2006/2007 season. He was later crowned the best player by Il Calcio for 16 goals and 8 assists in 33 games. On the other hand, Adrian Mutu known to make the case. On the night before the test match Romania cons San Marino, troubled striker was drunk and driving kendaraan.Mutu not alone, defender Gabriel Tamas West Bromwich Albion also come along. As a result, both directly penalized heavily.

In addition, he pointed out that not respecting the national team uniform (Romania). When the game against Serbia, he goes without saying hello to anyone and do not go to Bucharest with his team mate. He immediately to Italy. Evidently, the national team is no longer a priority for him. And Quality dropped from the Romanian national team.