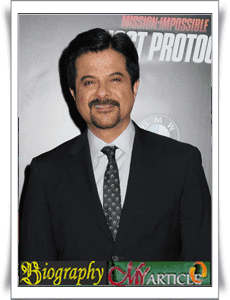 Anil Kapoor is an Indian film actor and producer born Chembur, Mumbai, Maharashtra, India, December 24, 1959. His acting is a lot of color screen Hollywood films, including his role as Mahesh in the film Tezaab (1988) starring alongside Madhuri Dixit. Through this film also received Best Actor Anil Filmfare Awards.

Career Anil kept rising in the acting world, to be able to give an acting-acting penoton received. Among the films success is RAM Lakhan (1988), PARINDA (1988), LAMHE (1991), and BETA (1992), which later led him to regain the Filmfare Best Actor Award.

While relating her personal life, Anil Kapoor is the younger brother of Sanjay Kapoor and Sunita Kapoor's husband. Of marriage, Anil endowed with two daughters and one son. Eldest of his daughter, Sonam Kapoor followed the footsteps of his father and starred in Saawariya.

In 2002, Anil debuted as a film producer and performer through BHAADAI HOO BHAADAI. Unfortunately this first experience was not too attract the audience. Anil did not give up and in 2005 re-produced My Wife's Murder were also not successful financially but assessed both by the critics. There is also a deterrent, Anil produced GANDHI, MY FATHER in 2007. This time the actor who has satisfied this experience was awarded the National Film Award and Special Jury Award.