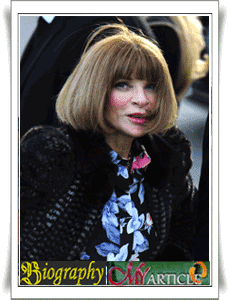 Anna Wintour, OBE born 3 November 1949 is the English editor-in-chief of American Vogue, a position she has held since 1988. In 2013, she became artistic director for Condé Nast, Vogue's publisher. With her trademark pageboy bob haircut and sunglasses, Wintour has become an important figure in much of the fashion world, widely praised for her eye for fashion trends and her support for younger designers. Her reportedly aloof and demanding personality has earned her the nickname "Nuclear Wintour", spoofing on the rather more serious phenomenon of nuclear winter.

She is the eldest daughter of Charles Wintour, editor of the London Evening Standard. Her father consulted her on how to make the newspaper relevant to the youth of the era. Anna became interested in fashion as a teenager. Her career in fashion journalism began at two British magazines. Later, she moved to the United States, with stints at New York and House & Garden. She returned home for a year to turn around British Vogue, and later assumed control of the franchise's magazine in New York, reviving what many saw as a stagnating publication. Her use of the magazine to shape the fashion industry has been the subject of debate within it. Animal rights activists have attacked her for promoting fur, while other critics have charged her with using the magazine to promote elitist views of femininity and beauty.

A former personal assistant, Lauren Weisberger, wrote the 2003 best selling roman à clef The Devil Wears Prada, later made into a successful film starring Meryl Streep as Miranda Priestly, a fashion editor, believed to be based on Wintour. In 2009, she was the focus of another film, R.J. Cutler's documentary The September Issue.

FAMILY
Wintour was born in London, in 1949, to Charles Wintour (1917–1999), editor of the Evening Standard, and Eleanor "Nonie" Trego Baker (1917-1995), daughter of a Harvard law professor. Her parents married in 1940 and divorced in 1979. Wintour was named after her maternal grandmother, Anna Baker (born Gilkynson), a merchant's daughter from Pennsylvania. Audrey Slaughter, a magazine editor who founded publications such as Honey and Petticoat, is her stepmother. The late-18th-century novelist Lady Elizabeth Foster, Duchess of Devonshire, was Wintour's great-great-great-grandmother, and Sir Augustus Vere Foster, the last Baronet of that name, was a granduncle.

She had four siblings. Her older brother, Gerald, died in a traffic accident as a child. One of her younger brothers, Patrick, is also a journalist, currently political editor of The Guardian. James and Nora Wintour have worked in London local government and for international non-governmental organisations respectively.

EARLY LIFE
In her youth, Wintour was educated at the independent North London Collegiate School, where she frequently rebelled against the dress code by taking up the hemlines of her skirts. At the age of 14, she began wearing her hair in a bob. She developed an interest in fashion as a regular viewer of Cathy McGowan on Ready Steady Go!, and from the issues of Seventeen her grandmother sent from America.

"Growing up in London in the '60s, you'd have to have had Irving Penn's sack over your head not to know something extraordinary was happening in fashion," she recalled. Her father regularly consulted her when he was considering ideas for increasing readership in the youth market. At the age of 15, she began dating well-connected older men. She was involved briefly with Piers Paul Read, then 24. In her later teens, she and gossip columnist Nigel Dempster became a fixture on the London club circuit.

In 1983, he met the editorial director of Condé Nast, the Publisher of Vogue, Alex Liberman. After that he accepted and get deals doubled his salary as first Director for Vogue magazine. One year after that he was married with a child psychiatrist david Shaffer. In 1987 he took over the House Garden & in New York and bring radical changes to the staff and the view.

He spread the photos and create so much fashion that became known as House & Garment. The name change apparently aggravated the situation of the company. Not only make customers much thinking to subscribe again, as well as some interesting sponsorship contract to continue with the company. He again became editor of Vogue magazine after ten months after issue House & style Garment is more focused. She placed as the editorial Masthead with all freedom. He is believed to be able to recover vogue with crazy as ideas in the world of fashion.

He proved his courage to stand in a style that always brings out a new fashion and style are acceptable in the society. The careers of designers like Marc Jacobs and Alexander Mcqueen helped by Wintour until they become successful people in the world of Fashion. He made a collaboration with Designer Thom Browne and Brooks Brothers in 2006 and produced by Brown that appeared in 90 retailers. He finally managed to prove his ability to pass through some of the previous dispute.

This woman has two children top with Shaffer, Charlie and Katherine. He was also a philanthropist, which was mandated from the metropolitan museum of Art in New York. He was a supporter of the dana Vogue. Collected more than 10 million u.s. dollars to be donated to AIDS charities in since 1990. He was fond of playing tennis and always get up before six in the morning and is a very disciplined person with respect to time.

Wintour is also involved in politics as a supporter of the Democratic Party. He received criticism from the launch of a book The Devil Wears Prada, Oppenheimer Front Row: the life and Times Best Hot Vogue Editor in 2005. It is very difficult to find for this interview and be prepared by mass media criticism. After divorcing in 1999 he lived in New York with former lover Shelby Bryan.