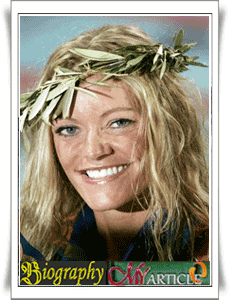 Inge de Bruijn is a swimmer from the Netherlands, who was born in Barendrecht, Zuid-Holland, on 24 August 1973. Since childhood, women commonly called Inky is indeed fond of swimming. He debuted at the World Aquatic Championships in January 1991, when he was not even 20 years old. At that time, he immediately won a bronze medal at 4x100m relay team, with whom he later won the gold medal at the European LC Championships in August of the same year.

Swimming World bestowed "Female World Swimmer of the Year" in 2000 and 2001. He won the title in three events at the World Championships in 2001. At the 2003 World Championship, Inge successfully defended his title in the 50-meter freestyle and butterfly style. At the 2004 Summer Olympics held in Athens, he maintains his gold medal in the 50 meter freestyle, in addition to silver merain at 100 meters freestyle, and two bronze she brushes: one bronze of style butterfly - butterfly 100 yards, and only he acquired Dutch swimmers team in the 4x100 meter relay.

With a collection of four Olympic gold medals, two silver medals and two bronze medals, you could say he is the most successful Dutch swimmer in Olympic history. Inky announced his retirement in March 2007, and became a model for lingerie company of Dutch origin, Sapph. Inky was rumored to use doping at the Sydney Olympics, along with compatriot swimmer Pieter van den Hoogenband, though later he proved never to fail in drug test or taking drugs.