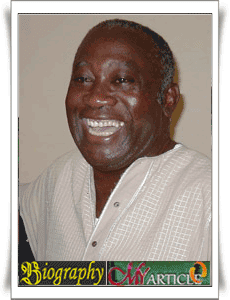 Laurent Koudou Gbagbo is President of Côte d'Ivoire since 2000 until his arrest in April 2011. Ggagbo worked as a history teacher. He was imprisoned in the early 1970s and again in the 1990s; he lived in exile in France for much of the 1980s due to its activities in the Union. Gbagbo set up the people's Front of Ivory Coast (FPI) in 1982. He ran for President against Felix Houphouët-Boigny multiparty politics in early 1990. And finally he managed to obtain seats in the National Assembly of Côte d'Ivoire.

Gbagbo became President after Robert Guei, leader of the military junta of prevents other leading politicians fight against Gbagbo in the presidential race in October 2000. Gbagbo declared victory after a general election and his supporters took to the streets to overthrow Guei. Gbagbo was sworn in as President After the presidential election of 2010.

Gbagbo defied the calculation of votes, accused of cheating, and refused to withdraw. He cancelled the election results in 9 States. Alassane Ouattara was declared the winner and is recognized by the observers of the election, the international community, the African Union (UA), and the Community of West African States.

He was arrested with four charges of crimes against humanity, among others, murder, rape and other forms of sexual violence, persecution and other inhumane acts. The case allegedly committed between December 16, 2010 and April 12, 2011, although many supporters stating that it is not true. Gbagbo was arrested in Korhogo, where he had been set to be under house arrest. After a flight to the Hague on 29 November 2011, many do not know where he was stationed.