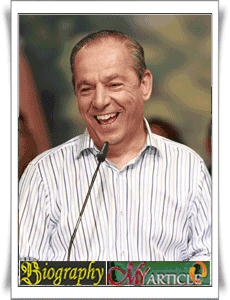 He was the eldest of four children. He received his formal education at St Joseph's school and then at St Aloysius College and seminary at The Archbishop's Seminary. Lawrence Gonzi is also a member of the Circolo gioventu Cattolica. He graduated from the University of Malta as a lawyer in 1975. After that he practiced his legal education at the results of a private company and then worked as a corporate lawyer with Mizzi Organization in which he served as President between 1989 and 1997.

Lawrence Gonzi's active involvement in the social sector, especially in the movement of the disabled rights and mental health sectors. He is also the Director of the Catholic action Malta between 1976 and 1986. In November 1987, Lawrence Gonzi was appointed as the first Chairman of the National Committee for the disabled and she kept this role until April 1994.

Gonzi's first foray in the elections of 1987 with the Partit Nazzjonalista, but failed. He was appointed speaker of the Parliament in 1988 and, in 1992, and was re-elected unanimously. Gonzi returned to fight in the 1996 elections and this time he succeeded. As an opposition member of Parliament, he sat as Minister of social policy in the shadow cabinet, as Secretary of the Nationalist Parliamentary Group, Party Whip (Vice Chairman of the opposition group) and later as General Secretary of the party.

On 23 March 2004, following the resignation of Eddie Fenech Adami as Prime Minister and party leader, Gonzi won the general elections held in February 2004. Lawrence Gonzi sworn in as Prime Minister, including in its portfolio the Treasury Department between 2004 and 2008.

On 1 May 2004 Malta joined the European Union and as Prime Minister, Dr Gonzi attended the official ceremony of the European Union which took place in Dublin, Ireland, where the flag of Malta had flown for the first time along with 24 other Member countries. As head of the Government of Malta, Lawrence Gonzi headed a meeting of the Commonwealth Heads of Government Meeting (CHOGM) in 2005 which was held in the country.