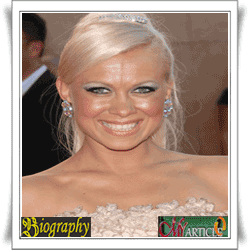 Oksana Baiul is a Ukrainian professional figure skater. When she was two years old his parents divorced, his father disappeared from his life so that he only lived with his mother's family. Her passion for skating began when his grandfather gave him a shoe ice skating at the age of three. He began to follow skating competitions at the age of 7 years. Baiul mother died when he was 13, when the grandparents had died so he was treated by his coach Galina Zmievskaya. Under the training of foster mother and coach, Galina Zmievskaya, at the age of 15 years, Baiul won the World Championships in 1993, and after defeating Nancy Kerrigan of the United States, he also won a gold medal at the 1994 Olympic Winter.

Although the status Baiul is an Olympic winner, but he and his adoptive family was still a shortage of financial terms. So even though at that time he was 16 years old and only four times the international competition (won two top ranking - World Championship and Olympic Games, and twice a runner-up European Championship), he decided to become a professional skater.

Some critics praised Osana ballet style and performance as a professional skater but Osana plagued by physical illness that affects his ability skating, the first is a knee operation, athroscopic, in the summer of 1994. At that time he advised doctors not skating at least 2 months. But he ignored the mandate of the doctor and back skating after a 2 week break because the coach had already signed contracts worth millions. This is drastically affect leaping ability. To divert his attention, Osana turned to alcohol and in 1997 he was arrested for DUI after crashing his car into a tree in Connecticut.