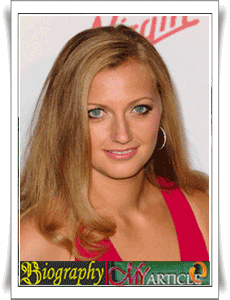 Petra Kvitova is a professional tennis player origin of the Czech Republic who is now ranked 2nd as the world's best female tennis player version of the WTA. He was great and was born by Jiri Kvita and Pavla Kvitova, where his father who introduced tennis to Petra. Petra practiced in his native land until he was 16 and then challenged to pursue a professional career in tennis.

In 2006, Petra began his professional career by following the ITF Circuit and won the second title in the women's singles. The following year he competed in the WTA, but has not managed to become champion. Petra recently won the championship for the first time in Moorilla Hobart International in 2009. While in 2010, he made it into the semi-finals Cellular South Cup.

In 2011, Petra gain success because he managed to win the Grand Slam in 2011 against Maria Sharapova. Besides, he also took home the title at the WTA Tour Championships Istanbul 2011 with the opponent Victoria Azarenka. WTA Premier Mandatory Madrid Championship also belongs to Petra after he once again beat Victoria Azarenka. Upon these achievements, Petra is now in the No. 2 spot as the best female tennis player.