Please Share this article is useful !
Ghosts can only tempt mankind in many ways. Not only do they manifest themselves with creepy faces or just simply creating a fragrant odor and foul smell alone, but can also be revealing its existence to human beings in any form. See also Ghost 9 ways to annoy people.

The following is a true story of a housewife named Winarsih ever the ghost bus heading for Surabaya-Banyuwangi. This mystical story has been going on since a couple of years ago, which is about the 1990s when mother Winarsih living in Banyuwangi was working on a plant in Waru, Sidoarjo, East Java. The mystical story of how this happened?

While still unmarried status, about the 1990s, I once worked in a bread factory in Waru, Sidoarjo. Since I am still a new employee in the factory, then I do not have a fixed place of kos, so I take a friend in boarding houses in Waru exactly to the East bus station terminal is Purabaya or commonly called Bungurasih in the South of Surabaya. 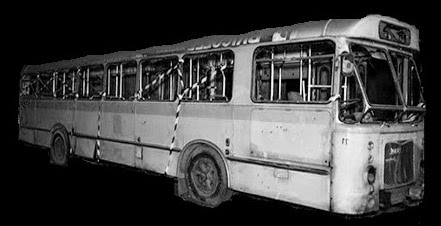 At the moment don't have place kos anyway, I often return from Surabaya (bungurasih) to Banyuwangi, almost 2 days once I go home because I have to move a little by little my stuff at home such as clothing, fan, as well as other do I need to live in boarding houses Waru.

On a night when I was out in the Banyuwangi and was about to go to Surabaya, I bring goods more than usual. I carry a large bag containing clothes and items of equipment of work and also bring food as a gift to my friends at kos-kosan. I leave from home with escorted by my neighbors who work as taxis to go to places that I normally use the bus intercept.

In the evening at 20.30 (half hour 9 nights), I arrived at the place that I normally use to intercept buses heading for Surabaya-Banyuwangi. At the moment it is raining drizzling and that night was the night Friday of legi. Actually my family forbade me to travel on the night of Friday legi because it was the day the sacred according to my family, they advise me to leave tomorrow early in the morning just to avoid night Friday of legi.

But due to me as of late and are afraid of new employees arrive at work, then I force myself off that night. This evening the atmosphere looks very quiet than usual because it was late at night and rain is going on. A fuss again I don't carry an umbrella for when leaving from home the weather was still sunny. Tonight was really lonely and no one looks except only the vehicles that pass by.

About half an hour I wait for the bus, the bus finally white Department of Surabaya-Banyuwangi I been waiting for passing and I was immediately menyetopnya. After the bus stopped, I jump up and get into the bus to look for seating while a little shivering cold because the rain affected.

Apparently the bus full of passengers so that I'll have to check one by one the benches for seating, and finally I got a pair of empty benches in the middle section of the bus. Okay, I can put my big purse on a bench which was beside me. I looked at the clock shows exact or 21.00 hours nine evenings.

A few moments after I finished manata and bus travel has started, I began to feel an oddity. I see all those bus passengers sleeping slumbering and they all use white clothes and his face covered in white cloth each are hers. I had thought maybe the passengers is a group tour from Bali and were exhausted so that they are dozing sleep. Only the driver and a conductor that I see no sleep.

Moments later the bus conductor approached me and handed me a ticket, then pay for it with money fitting of 3 thousand dollars as usual. Oddly again, the conductor always looked away and didn't want to look at me, and he did not say the words at all.

In this bus at all no noise of people talking like the bus in General. But I know this is because all passengers fall asleep exhausted so perhaps the conductor did not dare say so as not to annoy passengers. I also follow-up silence and dared not to sound too because I am afraid of another passenger distracted, then I could just sit down, be quiet, and delog-delog amazement.

My bus was finally arrived at Surabaya and enters terminal Bungurasih in Waru, Sidoarjo. However I feel there is an oddity anymore, that this was my bus does not stop on the tracks which are normally used to lose passengers, but stopped in forging