Please Share this article is useful !
PERSONAL
BIOGRAPHY
Adam Noah Levine, who was born in Los Angeles on March 18, 1979 of Patsy Noah and Fred Levine is known as a rock guitarist of the pop band Maroon 5. In addition to expert in musicians who play guitar, this one is also known as a songwriter and a founding member of Maroon 5. 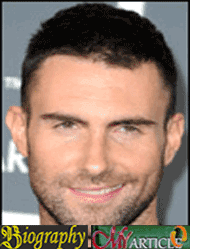 Levine has been in a relationship with a woman named Jane, who became his inspiration in creating the debut album entitled SONGS ABOUT JANE. But in an interview, Levine revealed that both of them are just very close friends.

September 2010, Levine was reportedly in a relationship with a model named Anne Vyalitsyna. These relationships were intertwined during the eight months, but eventually also in the middle of the road.

CAREER
Before joined in Maroon 5, Levine had joined a band called Kara's Flowers. The band was formed from the friendship Levine at Brentwood School. Feel along in line, eventually formed the band. in 1997, the band released its album titled THE FOURTH WORLD.

However, when Levine should continue to study at Five Towns College, the band was so scattered. Finally the personal was split. Some time after that, Levine also managed to hook the back of his friends and established a Maroon 5. As a proof of existence, come out of their debut album, entitled SONGS ABOUT JANE. Eventually this band together, Levine managed to go international.