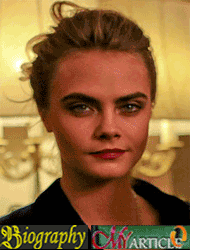 Delevingne began her modelling career at a young age she first appeared in Vogue Italia at age 10, having modelled in ads for Cadbury. She is currently the face of Burberry's Beauty campaign alongside fellow British models Edie Campbell and Jourdan Dunn.

Delevingne has graced the covers of Vogue UK thrice including a supplement cover in 2011, Vogue (Korea, Australia, Brasil, Japan, Italia, Portugal), LOVE, i-D, Russh, Jalouse, and Style.com's Spring 2013 issue. In addition, she was the cover girl of W's September 2013 issue. She also walked down the catwalk as a model in the 2012 and 2013 Victoria's Secret fashion shows. She is also the face of Chanel's Resort 2013 campaign along with Dutch model Saskia de Brauw. She also landed the face of DKNY in late 2012. In 2012, and 2014, Delevingne won the "Model of the Year" award at the British Fashion Awards.