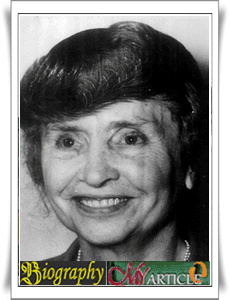 Helen Adams Keller is an American author, political activist and lecturer. He was the first deaf person who received a Bachelor of Arts. Helen Adams was widely known through his portrayal in The film The Miracle Worker, the story of how Keller's teacher, Anne Sullivan, broke through into the isolation of language weaknesses will be Helen, who then make these girls grow up learning to communicate.

Helen, as a prolific author, has bluntly voiced his anti-war beliefs. He was admitted as a member of the Socialist Party of America and the Industrial Workers of the World, he campaigned for women's suffrage, labor rights, socialism and the left radical issues or commonly referred to as the Extreme Left, the creation of a strong social equality in society and the demolition will all forms of social stratification. He was inducted into the Alabama women's Hall of Fame in 1971.

Helen gets many posthumously from the community, such as in 1999, Keller was recorded in Gallup's Most Widely Admired People of the 20th century, The Helen Keller Hospital in Sheffield, Alabama dedicated to her, then there's a road named after Helen Keller in Getafe-Spain-Israel, Lod, Lisbon-Portugal and in Caen-France.