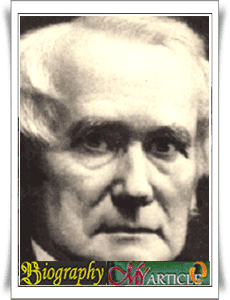 BIOGRAPHY
Henry Carey was born on December 15, 1793 in Philadelphia, Pennsylvania, United States. He was the son of an economics expert, Mathew Carey. At the time he was 28 years, Carey began to follow the footsteps of his father became an economist. Henry Charles Carey is the greatest economist of the 19th century. He is the originator of the economics of capitalism. He is known for his theory of the book entitled The Harmony of Interests.


Carey is an expert in the field of economic, political development, editor, and a publisher or author economy. Carey developed the theory of political economy belongs to the father. His father wrote a book Essays on Political Economy in 1822 which is the first book of the treatise the protection and promotion of the industry. In 1839, the father must dies, Carey continued his father's ideals.

In 1835, Carey founded the Franklin Fire Insurance Company in Philadelphia however, he ended his company in 1838 due to serious want to write a book of his theory, Principles of Political Economy in 1837 to be completed in 1840. The minutes of hers soon became the standard representation of thought in the College of Science American economy at that time. The book has been translated into Italian and Swedish with some variations.

Book Principles of Political Economy by Henry Carey has dominated economic and political situation of the system in the United States until 1973. The main objective Carey in the world political economy is to minimize the existence of slavery system and start salary system with the credit system and the system of lending and protect property rights intellectual. In 1859 until 1859, he and his colleagues worked on the book in three volumes entitled The Principles of Social Science. Henry Carey was the biggest achievement has served as Advisory Board President Abraham Lincoln in economics.

Carey supports free trade which became the forerunner of the trading system of capitalism. In his old age, he became an active board at the Royal Swedish Academy of Sciences in 1868 until his death on 13 October 1879. It is not known the cause of the death of Henry C. Carey.