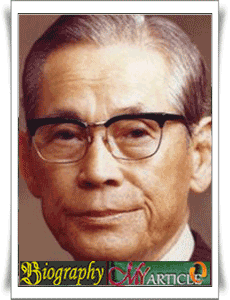 Lee Byung-chull known as a founder of the Samsung Group. He was the son of a wealthy family of landowners and briefly attended lectures at the University of Tokyo though not Wesda up graduated. He was the son of a rich landowner family from Lee clan in Gyeongju. He had undergone during the lecture at Waseda University in Tokyo, but he did not complete his degree.

Lee Byung-chull to use his inheritance to open a rice mill for the first attempt. the effort did not go well. In 1938, Lee Byung-Chull founded the company's trucking business in Daegu on March 1, 1938, which he named Samsung Trading Co., the forerunner of the Samsung. Samsung means "three stars" which describes a company's logo in the beginning. These businesses also sell fish, vegetables, and fruits to China. the company has grown rapidly and Lee moved its headquarters to Seoul in 1947.

When the war broke out, he was forced to Korea leaving Seoul and began a sugar factory in Busan Cheil Jedang named. And it was South Korea's first sugar factory. After the war, in 1954, Lee founded Cheil Mojik and built a woolen mill in Chimsan-dong, Daegu. And it was the largest woolen mill in the country, the company grew rapidly to become big companies. Not all companies with well-known Brand when it was set up from scratch with the Brand, such as Samsung Group companies which are currently more dikela by the public as Electronic Telecommunications companies at first is a company engaged in a far different from today.

From 1958 onwards Samsung began expanding into other industries such as finance, media, chemicals and shipbuilding throughout the 1970s.In the late 60s, the Samsung Group began to enter into the electronic industry. So that the company could develop rapidly enterprise work task in the form of electronic divisions, of which Samsung Electronics Co. is Devices, Samsung Electro-Mechanics co., Samsung Corning co., and Samsung Semiconductor & Telecommunications Co., and making facilities in Suwon. Its first product was a black-and-white television.

In 1961 Lee was in Japan and for some time he did not return to South Korea. Finally an agreement between Lee and Chairman of the Korea time directing Lee back but Samsung should give up control over the acquired bank and follow the economic directives of the Government. Later in life he served as Chairman of the Federation of Korea Industries and is known as the richest man in Korea.

After his death, his property (Ho-Am) opened to the public for tours. His Korea art collection is considered one of the largest and best private collections in the country and has a number of art objects that have been designated as national wealth by the Government of Korea. Ho-Am is located not far from the Park Everland, the most popular South Korea Park Everland entertainment, also owned by Samsung Group.